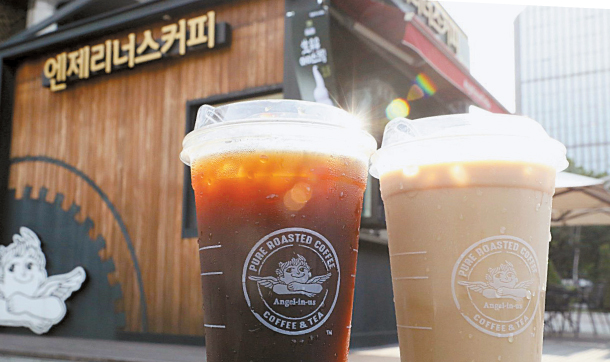 Major cafe franchises are coming up with creative ways to cut down on plastic waste in line with the government’s ban on serving drinks in disposable cups.

This is the first use of this type of cup in a Korean cafe.

The lid of the new plastic cup will have small slits near the edge, similar to paper cups used to serve warm drinks.

Thanks to this new plastic cup design, the franchise estimates that it will halve its current plastic straw waste from 68 million to 34 million straws a year.

“Our company decided to introduce straw-free cups in light of the difficulties involved in recycling plastic straws,” said an Angel-in-us Coffee spokesman. “We are now delivering the new plastic cups to Angel-in-us Coffee cafes across the country. I expect all stores will begin serving beverages in these cups as early as next month after they deplete their stock of the original plastic cups.”

Angel-in-us Coffee is one of 21 cafe and fast food franchises that signed a voluntary agreement with the Ministry of Environment to cut down on the use of disposable products like cups and straws in May.

The participating companies have been discouraging customers from using plastic cups and offering discounts to those who bring in their own tumblers. Many of the participants are focusing on curbing the use of plastic straws, which are harder to recycle than plastic cups.

The Environment Ministry estimates that 2.6 billion plastic straws are used annually in Korea.

Dunkin’ Donuts and Baskin Robbins, both participants in the agreement, stopped making their straw dispensers available to customers in June and now only provide straws upon request.

Starbucks Korea and Paik’s Coffee are currently testing out paper straws and straw-free plastic cups for future adoption as well.

Alarmed by the unprecedented growth in plastic cup and straw use in Korea, the government has recently been putting heavy pressure on cafes to cut their disposable waste.

Starting last Thursday, local government bodies across the country began penalizing cafes for using disposable plastic cups in their stores, citing the Act on the Promotion of Saving and Recycling of Resources.

Local governing bodies can now fine cafes up to 2 million won ($1,785) for serving beverages in disposable plastic cups to customers having their drinks on the premises.

Cafes, however, will still be able to serve beverages in disposable cups for take-out orders.