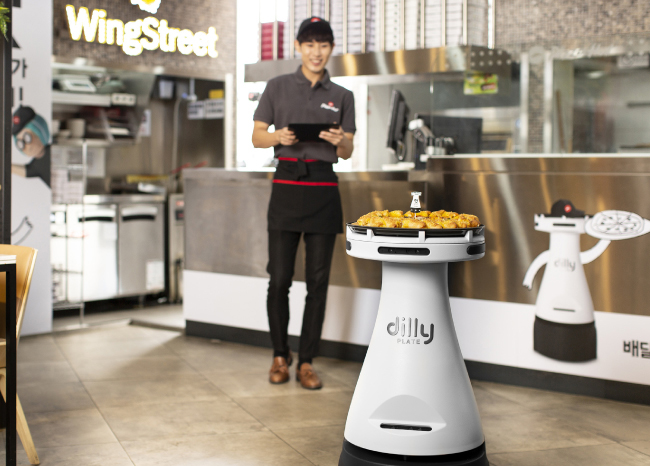 Another day, another Dilly - or so the saying probably goes in Baedal Minjok’s head office.

The food-delivery app’s Dilly Plate robot has started serving up slices at a Pizza Hut restaurant in Mok-dong, western Seoul, according to both companies on Wednesday. Dilly Plate, the new serving robot, is not to be confused with plain old Dilly, the delivery robot that the company has been working on since last year.

Dilly Plate is a self-driving robot specifically designed for restaurants. Having first started working at the Pizza Hut restaurant on Monday, it will assist human employees in serving pizza for two weeks until Aug. 19.

Dilly Plate can safely carry up to 22 kilograms (48.5 pounds) at once - a limit that is unlikely to be tested in Pizza Hut - and lasts eight hours on a single charge. The robot uses a 3-D camera and sensors to control its movement. It automatically stops and avoids obstacles and people.

A spokesman for Baedal Minjok, or Baemin, explained that Dilly Plate can move quickly, but in Pizza Hut, the speed has been limited to a human walking speed for the safety of both customers and pizzas.

“The store will have people walking around, and there may be emergency situations like collisions if Dilly moves too fast,” he said.

Dilly Plate was developed by Bear Robotics, a U.S. start-up co-founded last year by John Ha, a former Google engineer originally from Korea. In April, Baemin invested $2 million in the venture in exchange for convertible bonds.

Dilly Plate is modeled after Penny, a robot that found employment at Ha’s restaurant in California.

Dilly Plate will be the first server robot introduced in Korea. Before it could begin work in Pizza Hut’s Mok-dong restaurant, Baemin had to map out the store and install it in the robot’s software.

“We’re looking forward to Dilly’s performance [and hoping it will] unburden human staff from having to carry pizzas,” said Cho Yoon-sang, a senior marketing executive at Pizza Hut Korea. “This way, human servers will be able to focus on providing quality service to our customers. We decided [to hire] Dilly with hopes of enhancing work efficiency and improving customer service.”

Baemin is hoping that the two-week trial will give more actual data regarding Dilly Plate’s operation, with the goal of introducing the server robot at more restaurants in the future.

Baemin has been investing in robots since last year, aiming to develop robots that deliver food to consumers’ doors. The original Dilly had its first successful test run at a food court in Cheonan, South Chungcheong, in May. The plan is to gradually expand original Dilly’s boundaries from indoors to outdoors until it is able to fully run on its own on the streets.