Lotte near university to get big VR ‘theme park’

Lotte near university to get big VR ‘theme park’ 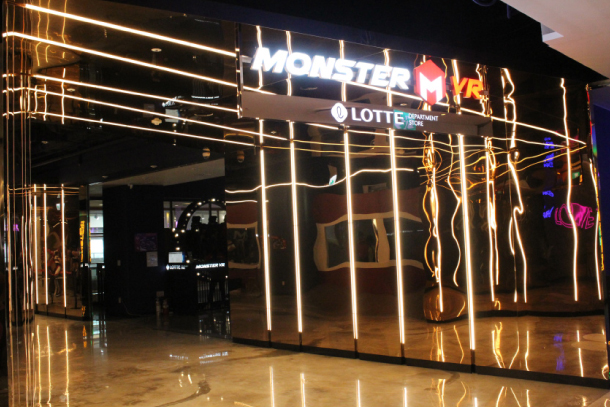 The entrance of VR theme park Lotte Monster VR, which opens on Friday on the 10th floor of the Lotte Department Store near Konkuk University. [LOTTE DEPARTMENT STORE]

Lotte Department Store will open a big virtual reality (VR) theme park on the 10th floor of its branch near Konkuk University, eastern Seoul, on Friday.

The operation, named Lotte Monster VR, will offer more than 60 VR attractions or rides. Previously, the 10th floor of that store had restaurants and a culture center.

The project was developed over a year with local company GPM, which runs a chain of VR theme parks or arcades.

Lotte’s VR rides will mimic the experience of rafting, bungee jumping and riding a roller coaster. On a lower grade of the thrill scale, it will offer a virtual balloon ride. Lotte also will have a small VR film theater with 14 seats called the Monster Cinema, continuing the monster theme.

Monster Cubes is an enclosed attraction with a huge screen in which a small group of people can play around 50 VR games and videos. One corner of the 10th floor with have a nearly 150-square-meter (1,614-square-feet) cafe.

The retail giant said in a statement that it was trying to reverse the trend of young customers “turning away from brick-and-mortar stores in favor of ecommerce.”

Because Lotte’s store is near Konkuk University, 35 percent of its sales come from customers in their 20s and 30s - a much higher figure than at other branches.

The company said it first realized the potential of VR attractions when it operated a small VR arcade in el CUBE’s Hongdae branch, western Seoul, from September 2017 to last March.

The arcade was only 148 square meters, but there were queues of people waiting for as long as one hour to get in on weekends, the company said. It was particularly a success among customers in their teens and 20s.

“A VR theme park is a new kind of attraction for a local department store,” said Yoo Hyeong-ju, who heads Lotte Department Store’s development team. “We’re expecting the arcade to extend the amount of time people will spend in the store, particularly customers in their 20s and 30s, as well as families.”