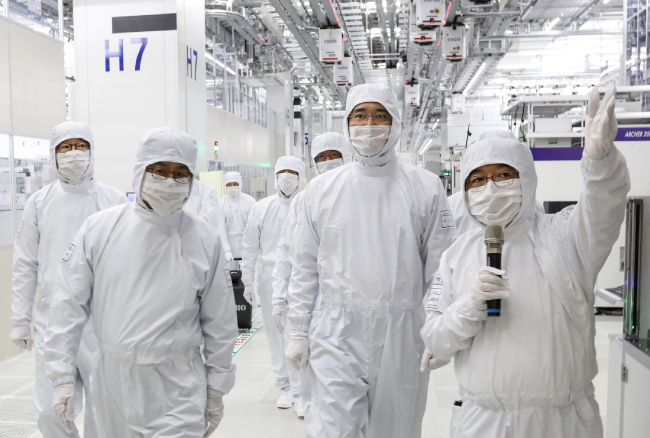 Samsung announced Wednesday it will spend 180 trillion won (＄160.7 billion) and hire 40,000 more employees over the next three years to drive growth - an unprecedentedly ambitious plan from Korea’s biggest conglomerate.

The 180 trillion won includes capital expenditures and research and development, and some 130 trillion won - 43.3 trillion won on annual average - will be dedicated to the domestic market, which Samsung said would indirectly create 700,000 more jobs.

The annual figure is in line with the 43.4 trillion won Samsung spent on new facilities last year. 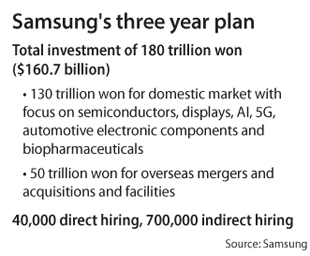 The remaining 50 trillion won in investments is speculated to be earmarked for mergers and acquisitions as well as foreign manufacturing facilities.

The pledge of 40,000 new jobs is meant to give jobs to young Koreans, the group explained. Korea is struggling with the worst youth unemployment rate in its history. The number of new jobs created by Samsung over the past three years was between 20,000 and 25,000.

“Today’s announcement follows many months of deliberation and review by the management and board of directors of different Samsung companies that will make the investments, including Samsung Electronics,” Samsung said in a statement.

The investments are divided into two categories. One is to sustain the company’s leadership in semiconductors and displays.

“In addition to investments for memory products, spending will be dedicated to non-memory products and new advanced manufacturing equipment,” Samsung said. Developing profitable and new products will be the focus in displays, amid rising competition in the industry.

The plan to invest 180 trillion won exceeds a widely expected figure of 100 trillion won. Samsung was supposed to announce its investment and hiring plans on Monday when Finance Minister Kim Dong-yeon visited its Pyeongtaek campus in Gyeonggi and met with its de facto chairman, Lee Jae-yong. But Samsung delayed the announcement at the last minute after stories were published that accused the government of “begging” for investments from conglomerates.

Samsung’s ambitious plan does follow a request from President Moon Jae-in. In mid-July, the president directly asked Lee to “invest more locally and create more jobs” when the two met at a ceremony in India to mark the completion of Samsung’s biggest smartphone factory in the world.

In Wednesday’s announcement, Samsung changed its focus to AI and 5G connectivity that will create new opportunities in autonomous driving, the Internet of Things (IoT) and robotics. The top chaebol had already vowed to significantly expand its AI research capability, increasing its number of advanced AI researchers to 1,000. Becoming a global player in advanced markets for 5G chipsets and related devices and equipment is also on Samsung’s road map for the future.

Samsung aims to become a leader in electronics components for future cars such as system on chip (SoC) semiconductors for autonomous driving, using its leadership in semiconductor, telecommunications and display technologies.

In biopharmaceuticals, the group said it has seen strong growth in both contract manufacturing and the biosimilar businesses, promising to invest heavily to combat chronic and difficult-to-cure diseases.

Following the upbeat statement on Samsung’s biopharmaceutical ambitions - despite a recent scandal over suspected accounting fraud - shares of Samsung BioLogics shot up 7.08 percent to close at 454,000 won Wednesday.

Peaking at 600,000 won in April, the shares nose-dived to as low as 353,000 won early May after the Financial Supervisory Service started auditing it for accounting irregularities.