‘Currently, the NPS is not free from the government’s hold’

‘Currently, the NPS is not free from the government’s hold’ 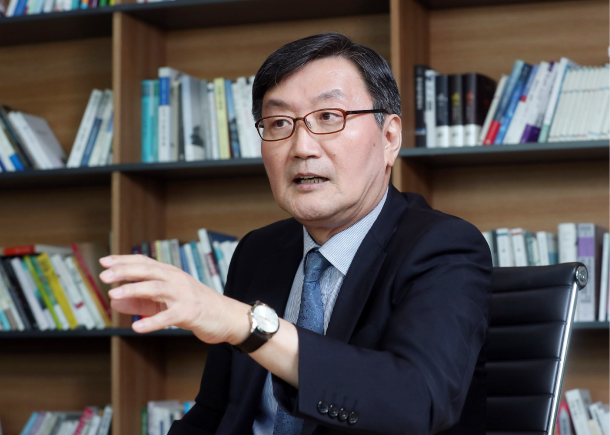 First is the challenge of boosting the profitability of its funds. The NPS, Korea’s largest institutional investor, invests using insurance payments collected from the 22 million Korean citizens who have jobs or own their own businesses. The NPS’s core duty is to maximize profits by investing these funds and providing retirement and disability benefits to Korean citizens.
The second challenge for the NPS is maintaining independence from the government.

Concerns of government interference in private companies’ governance surfaced when the NPS — whose key decision makers are government officials — adopted a stewardship code on July 30. While the stewardship code’s main purpose is to help the NPS exercise its voting rights transparently and responsibly, it also allows the pension fund to engage more actively in corporate management on the grounds of protecting its beneficiary’s interests.

The NPS currently has 130 trillion won (＄115.8 billion) invested in domestic shares and owns stakes of 5 percent or more in 299 Korean companies. It has a total of 635 trillion won in funds.

The JoongAng Ilbo sat down with Jun Kwang-woo, former chairman and CEO of the NPS, to discuss the future of the fund. Jun, 68, served as head of the NPS between 2009 and 2013, and became the fund’s first head to be appointed from a non-political background. Prior to his career at the NPS, Jun served in various roles, including as chairman of Deloitte Korea and senior economist at the World Bank.

Q. How do you view the adoption of the stewardship code?

A. The stewardship code is like a double-edged sword. If the NPS properly follows the code, it can boost long-term value and profitability by demonstrating transparency and responsibility. Problems occur when the code is misused or abused. The value of invested companies can fall if the government tries to force a structural or management change in companies via the NPS. This will cause the NPS to lose profitability.

Why is it so important for the NPS to be professional and independent?

Currently, the NPS is not free from the government’s hold. Take a look at the make-up of the National Pension Fund Management Committee. Six of the committee members are government officials, including committee head Park Neung-hoo, who is also the health and welfare minister. Representatives of beneficiaries, regions and labor comprise another twelve members, while there are only two professional experts. This hurts the professionalism of the NPS.

The role of the NPS has changed from before. Now, because the NPS is actively exercising voting rights, it is critical for them to be independent and professional.

Then how can we secure the independence and expertise of the NPS?

There are two ways. The first is to make the fund managing body into an independent public corporation. It will then be relatively free from the government’s supervision.

The second option is to keep the National Pension Fund Management Committee part of the NPS, but have six to seven full-time experts form its core, instead of politicians. The structure will be similar to the Bank of Korea’s Monetary Policy Board.

Not many people now question the independence of the Monetary Policy Board. If the National Pension Fund Management Committee functions separately as well, it can improve its credibility.

The NPS’s average investment return was 7.26 percent last year. This May, the average return was 1.16 percent, with the return from domestic stocks minus 1.18 percent. Should we be worried?

The poor record was inevitable due to the troubled situation of the domestic stock market. But there is no need to react sensitively to low short-term profitability. The pension fund has to manage long-term profitability and focus on the quality of its profits.

The problem is that too much is invested in domestic shares. The NPS now owns 7 percent of the country’s total market capitalization.
In contrast, the NPS has invested relatively little in alternative and foreign assets. Though the target investment amount in alternative assets, which include real estate and infrastructure, was 2 trillion won for this year, the NPS is said to have only fulfilled 1 percent of that goal so far. Return of investment has been low due to the poor performance of the domestic stock market, but the NPS is hesitant about making large-scale investments in alternative assets due to their risky nature.

What can be done to prevent the NPS from investing in risky investments?

We have to recruit qualified experts and compensate them well. Politicians shouldn’t get in the way. The main task of a pension fund is maintaining stability while raising profits. Raising profitability by 1 percent can delay funds running out by five to eight years.
To prevent funds from running out quickly, the government can raise insurance fees or collect insurance payments slowly, but that isn’t easy to accomplish politically. For now, we have to prioritize increasing profitability.

What do you make of the relocation of the NPS headquarters to Jeonju, North Jeolla?

I hope that the NPS can successfully put down roots in the countryside. But one thing to note is that key personnel from foreign investment banks and private equity funds visit major Asian cities like Shanghai, Tokyo and Seoul once or twice a year. The NPS should set up a Seoul office for them at least.