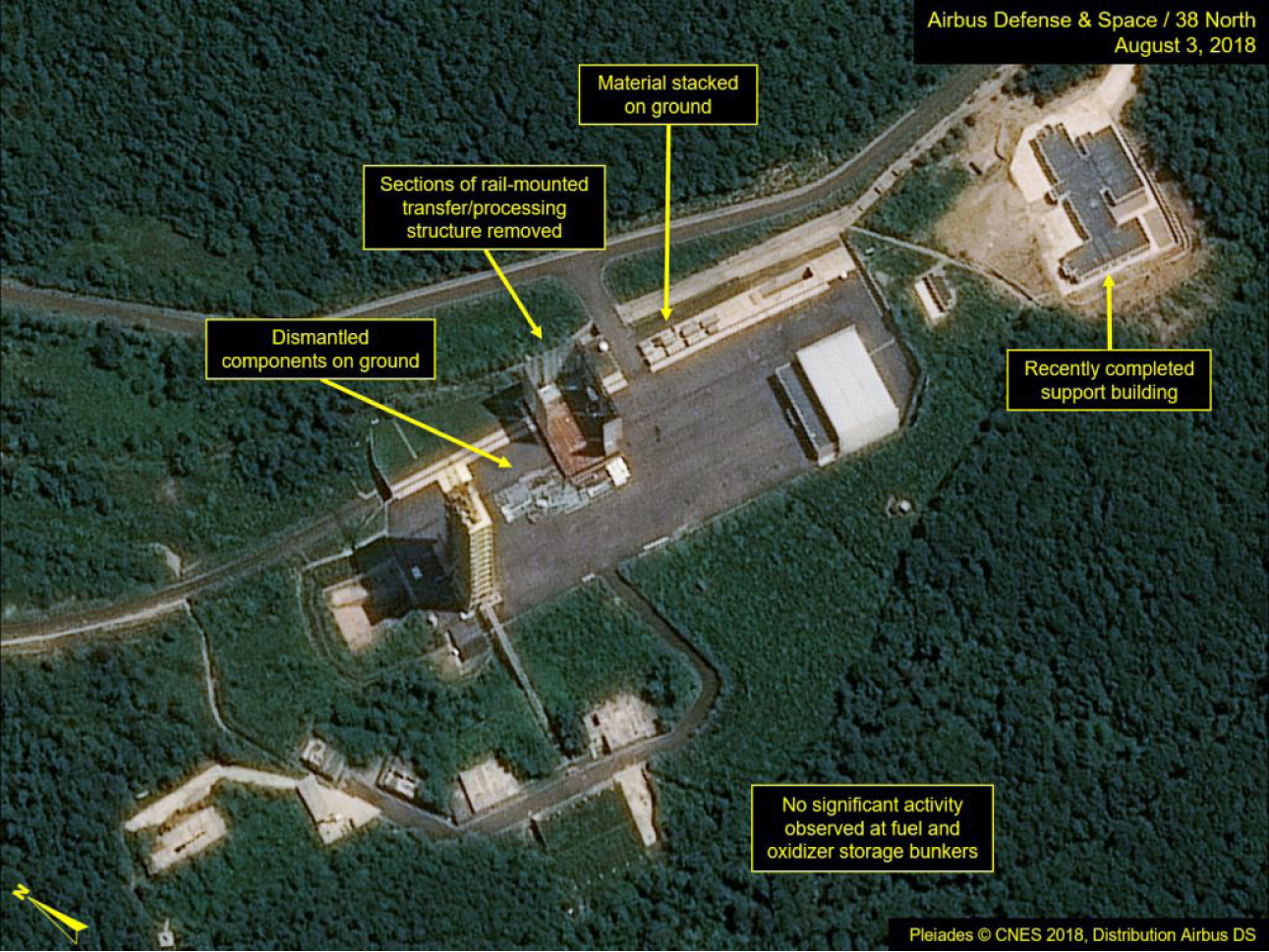 Satellite images released by 38 North on Tuesday show the partial dismantlement of a rail-mounted transfer structure, center, at the Sohae launch site in North Korea. [YONHAP]

Some of the work “appears to go beyond” Kim’s commitment, 38 North wrote, citing satellite images from last Friday. But the activities must be viewed cautiously as “first steps” since they are not presently permanent or irreversible, the website warned.

The comment was part of a report that followed an earlier analysis published by the same website on July 23, in which Joseph S. Bermudez Jr., an expert on North Korea’s weapons program, said Pyongyang started taking down facilities believed to have played an “important role” in the development of North Korea’s intercontinental ballistic missiles (ICBMs).

The testing site, known in the North as the Sohae Satellite Launching Ground, is located in Cholsan County, North Pyongan Province, along the country’s west coast.

In its analysis, 38 North reported that progress on tearing down the steel base structure of the vertical engine test stand, used for testing and developing engines for ballistic missiles and space launch vehicles, was continuing. The North Koreans are also removing fuel and oxidizer tanks from dismantled bunkers, the website said.

At the launch pad, work on the rail-mounted processing/transfer structure used to support rocket launches continues, the website continued, with two-thirds of the west wall and a third of the north wall removed. Its components remain on the adjacent ground. The launch pad seems to be related to dismantlement, but “we cannot rule out the possibility that it could be the beginning of a project to modify the structure for other purposes,” the report read.

A stronger gesture from Pyongyang, including permanent and irreversible actions, would be demolishing the test stand’s concrete foundations, launch pad’s gantry tower, pad foundation and exhaust deflector, 38 North said, “as there is no known facility with equivalent capabilities elsewhere in the country.”

The Sohae site is believed to be where North Korea developed the engine for the Hwasong-15 ICBM, which Seoul and Washington believe can reach the U.S. mainland. In the past, the North has launched several satellite-carrying rockets from the site, which the international community saw as a front for developing ICBMs.

Although the North appears to be scrapping its Sohae site, it has not necessarily stopped developing missiles.