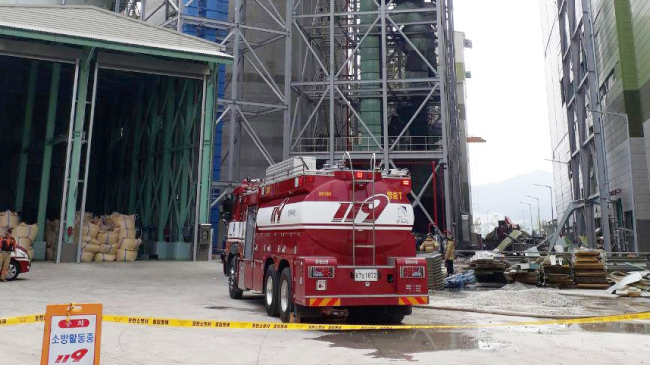 An explosion during a test run at a newly built coal-fired power plant in Pocheon, Gyeonggi, Wednesday morning left one worker dead and four others injured, police said.

According to police and fire authorities, a 45-year-old employee of a subcontractor surnamed Kim was killed when a conveyor belt in the plant’s basement carrying coal to the furnace suddenly blew up.

Four other workers suffered burns and are being treated at local hospitals, with one of the victims suffering first degree burns on his body. Kim and two of the injured were in the basement when the explosion occurred, while the other two were above ground.

The exact cause of the blast is still under investigation, but the police suspect that combustible dust around the conveyor belt may have ignited. Dust explosions are a frequent hazard in industrial environments, occurring when powered combustible material is concentrated in a confined space.

The fire department pointed to an electric spark as the likely cause. Park Yong-ho, the Pocheon Fire Station chief, said in an emergency press conference that further investigation is needed, but that “it looks like the spark-proof switch on the machine malfunctioned while the workers were conducting maintenance operations on the conveyor belt’s speed sensor.”

The power plant, which runs on bituminous coal and generates 550 tons of steam per hour and 169.9 megawatts of electricity, is owned by GS E&R, an energy provider which operates Korea’s largest combined heat and power (CHP) plants in Gumi, North Gyeongsang, and Ansan, Gyeonggi.

Permission to build a new CHP power plant in Pocheon was granted to the company in October 2015, and construction broke ground in December of that year.

Neighbors, however, protested the plant’s construction because of concerns about the impact on the environment - including fine dust creation. Last year, some local residents blocked trucks carrying building material from entering the construction site for over a month.

With construction of key facilities now nearly complete, the plant began test operations from April of this year to prepare for a commercial opening at the end of this month.

The accident may give momentum to neighbors’ efforts to have the plant’s construction license revoked.

Upon hearing of the explosion Wednesday morning, Gyeonggi Gov. Lee Jae-myung sent one of his deputies to review the accident site and ordered an immediate halt to all operations at the plant until safety concerns are fully addressed, said a spokesman from the provincial office.

Lee visited the plant while running for governor before the June 13 local elections and pledged to form a policy coordination committee to address concerns from Pocheon’s residents.

Regulation of the coal-fired power plant was one of the solutions to be mulled by the committee.