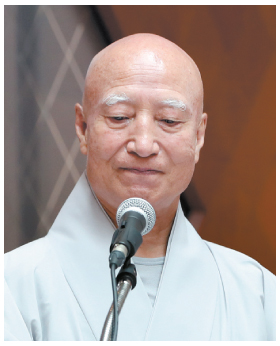 The spiritual leader of Korea’s largest Buddhist sect threw his weight behind the resignation of its scandal-ridden president on Wednesday, a symbolic gesture that could expedite the selection of a new leader to guide the organization out of its internal strife.

“The Venerable Seoljeong has expressed his will to step down for the sake of harmony and stability in the order, regardless of whether the allegations he faces are true or not,” the Venerable Jinje, supreme patriarch of the Jogye Order, said at the organization’s headquarters in central Seoul. “The order’s legal framework must guarantee that a solemn but orderly resignation takes place.”

As the supreme patriarch, Jinje holds authority on religious matters, but real power is vested in the Jogye Order’s administrative offices. The supreme patriarch is not allowed to interfere in the organization’s worldly governance, which is overseen by the president, a post elected by an exclusive body of 300 monks from temples across the country.

Jinje’s remarks on Wednesday represent a rare intervention into the organization’s governance and strengthens the call for Seoljeong to step down from his post.

Seoljeong, 76, was elected president last October but faced heavy criticism from within and outside the organization for a string of allegations including forgery of his academic background, embezzlement of organization funds and fathering a daughter. The Buddhist sect prohibits its clergy from engaging in sexual relations or having children.

The rumors, which were widely circulated among monks even before Seoljeong’s election but received little attention outside the order, gained public traction in May after MBC aired a segment on its investigative journalism program “PD Notebook” that dug into Seoljeong’s past.

The program broadcast evidence that the monk may have embezzled the order’s funds while he was spiritual director of Sudeok Temple in Yesan, South Chungcheong, to pay off a woman claiming to be his daughter over the course of a decade.

July saw an escalation of dissidence within the order when an 87-year-old monk, the Venerable Seoljo, carried out a 41-day fast demanding Seoljeong’s resignation. His fast ended when he was hospitalized on July 30.

Dissidents in the organization have also called for the right of all clergy members to elect the order’s president and other reform measures to root out corruption in its highest echelons.

Mounting pressure eventually forced Seoljeong to announce his resignation on Aug. 2, but he has continued to fight the charges against him. On Tuesday, he visited Seoul National University Hospital to conduct a paternity test with the intention of clearing his name.

Seoljeong’s case renewed calls for the government to investigate high-level monks for corruption and abuse of power. Jinje on Wednesday objected to the notion, citing a 1980 incident in which soldiers and police stormed temples across the country to crack down on pro-democracy monks.

Critics believe the top clergy’s opposition to secular oversight stems from fear that its malpractices might be exposed.