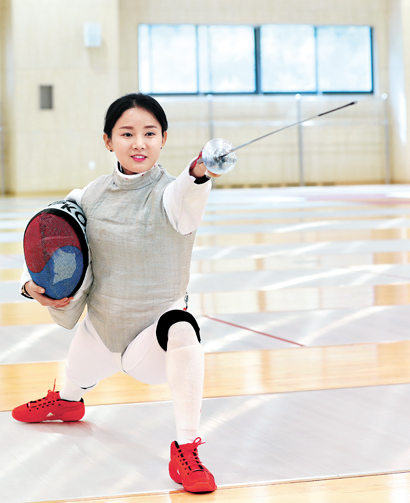 After 20 years on the Korean national women’s fencing team, Nam Hyun-hee, a foil fencer, has taken home 98 medals from international events. Nam plans to make it 100 at the 2018 Asian Games, and she won’t settle for anything less than two golds.

Nam keeps a list of the medals she has won on her mobile phone. She has taken home 34 golds, 24 silver and 40 bronze from nine major international events including the Olympic and Asian Games (Asiad).

“It’ll feel so satisfying if I can win my 100th medal,” Nam said. “It’ll wash away all memories about the hard times throughout my career.”

Nam has won six gold medals at the Asian Games, starting in 2002 in Busan. This is one less than speed skater Lee Seung-hoon and the same as swimmer Park Tae-hwan. If Nam does take home two golds, she will overtake Lee Seung-hoon to become the Korean athlete with the most Asiad golds.

Despite her expansive medal collection, Nam is never satisfied.

“A lot of retired players told me that I’ll start slacking if I continue my career because I have achieved so much,” Nam said. “When I look around, I’ve seen quite a number of players who have lost motivation and ended up retiring. But I want to try my best until the end. To keep myself together, I need motivation. This is why I always set a goal.”

When Nam competed at the 2014 Asian Games in Incheon, she thought it would be her last, but she put aside retirement and decided to compete one last time.

“I took two months off and told my team about it, thinking that I’d quit,” Nam said. “But my team asked me to compete in the national team qualifier.”

Nam competed at the 2016 Rio Olympics but failed to medal. She has since tried her hardest to prepare for the 2018 Asian Games. Despite getting knee surgery in May, Nam still managed to return to the piste and won a gold medal in the team event at the Asian Fencing Championship in Bangkok in June.

“Since I first injured it four years ago, my knee’s been like a time bomb,” Nam said. “I also get scared because getting knee surgery means retirement is coming soon. I had surgery to remove the cartilage in my knee and it went better than I thought. [At the time,] the doctor who did my surgery confidently said I can play for at least two more years.”

Though this may be her last Asian Games, Nam hopes to retire after competing at the 2020 Tokyo Olympics.

Nam’s career has always been an uphill battle, mainly because she doesn’t have a typical fencing physique. Standing at 1.55 meters (five feet one inch), Nam has often been told that she could never be a top fencer because she can’t compete with athletes who are 20 to 30 centimeters (7.8 to 11.8 inches) taller than her.

Nam didn’t share that opinion. The veteran swordswoman has never let her height hold her back, instead relying on speed to overcome larger opponents.

Nam married cyclist Gong Hyo-suk in 2011 and gave birth to a daughter in 2013. For most athletes, marriage means retirement, but Nam wasn’t ready to lay down her sword. Just four months after giving birth, Nam got back on the piste and earned her spot on the Korean national team for the 2014 Asian Games in Incheon. Even more impressively, she took home gold in the team event.

“The people who told me that I can’t [be the best] because I’m too short, married or have given birth are now saying that I’m making history,” Nam said. “Now, they’re telling me that it’s not time to retire yet. I never have to be disappointed about people telling me that I can’t do something. I could have taken the easy path, but I didn’t. I tried hard to look confident and this mindset led me to better results and gave me more confidence.”

For Nam, who has been on the national team since 1999 when she was still a high school student, wearing the Korean flag is a matter of honor.

“It’s my body but it’s also the country’s as well,” Nam said. “I need to respond to the support I received from the country. When I first competed in international events, I was ignored by European players because I was a short Asian fencer. If I had to go through that all by myself, I wouldn’t have been able to get through it. Every time I tried to step back, I always reminded myself that I [represent] Korea and this gave me the strength to push forward. That’s what the national team means to me.”