Lack of support means student athletes throw in the towel

Lack of support means student athletes throw in the towel

Every year, one in every 10 student athletes makes it onto a national team in Korea, according to the Korea University Sports Federation (KUSF). Only a handful of those lucky few will ever make a name for themselves on the international stage - the rest will never have their stories told. 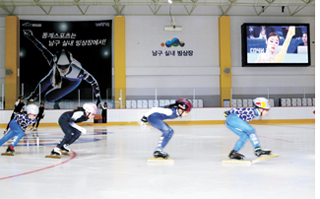 Student speed skaters train at an ice rink at Baegunpo Sports Park in Busan on May 10. The ice rink is one of two rinks in Busan big enough to meet international standards. [YONHAP]

Son Ji-yoon is one of them.

“I had to wake up at 3 a.m. and get to the rink by 4 a.m. at the latest, because there were not enough rinks for ice hockey players, speed skaters and short-track skaters,” Son said. “We had to share one rink between all the players.”

Son, a high school student in Gyeonggi, gave up more than half of her life to pursue her dream of becoming a professional figure skater. She was eventually forced to quit because she couldn’t handle the rigid training system.

In Korea, there are a limited number of ice rinks that can be used for training purposes, meaning there is less space and time for training.

After training in the early mornings, Son had to rush to her school, over an hour away. She would typically miss her first and second class and would have to leave school before the end of the day to get back across town for more training. Son’s studies struggled as she had so little time to do homework or even sleep - eventually she couldn’t even participate in class.

One of the reasons Son was forced to give up on her dream was because she wasn’t able to do well enough academically. Despite the difficult training schedules that student athletes have to follow, they are still required to achieve certain grades.

From 2017, the Gyeonggi Provincial Education Office announced that athletes have to score higher than their school’s average grade in order to participate in competitions.

“It is hard to get good grades or even participate in class for athletes like me because we train from day to night and have little time to sleep,” Son said. “If the country invested more money and time to solve the problem of limited space and time for training, athletes would be in school at the right time without missing classes because of evening training sessions.”

Paik Seung-ho, a Korean football player who plays for Girona FC in Italy, describes a very different approach to education when he was training in Spain.

“For the past six years, I spent more time studying than training. Training was only for five hours after school, the rest of the time I was sitting in front of a desk studying,” Paik told Asian Economies.

On the other hand, 60 percent of student athletes in Korea train for more than seven hours per day, typically six or seven days a week, according to the KUSF.

As well as the long hours and lack of rest, many student athletes in Korea complain of the pressure of a sport culture that only rewards victory.

“The reason why students mostly give up and the reason I gave up was that, in Korea, people only remember and support the winner,” Son said. “So even if you came second, that would mean nothing because the union would only support the winner, just like a one-man show.”

Based on her ten years of experience as a trainee, Son is concerned that not enough is being done to support young athletes struggling with the extreme stress and pressure that comes with this drive to win.

“What adults want are results and medals - no one seems to care about the process that the athletes are in,” said Son. “There are no solutions as they say we have to take responsibility for our own decisions. When athletes give up, it is extremely hard to go back to school like a normal student we have little experience in the classroom. There are a lot of athletes who go back to school with depression and anxiety problems.”

Son isn’t the only person to notice these mental pressures.

“It is okay to whip a running horse, but there must not be a scar left,” said Guus Hiddink, former manager of the Korea national football team.