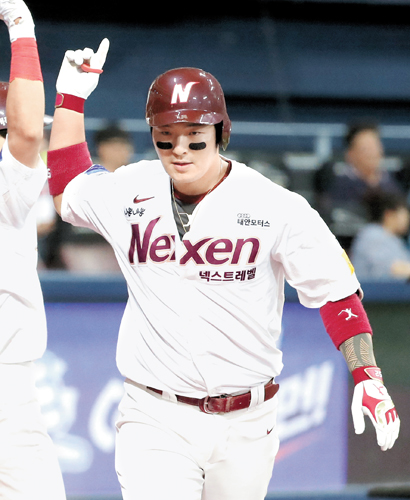 Park Byung-ho of the Nexen Heroes celebrates after hitting a solo home run during a game against the Kia Tigers at Gocheok Sky Dome, western Seoul, on Wednesday. [ILGAN SPORTS]

Park Byung-ho of the Nexen Heores hit his 30th home run of the season during a game against the Kia Tigers at Gocheok Sky Dome in western Seoul on Wednesday.

With a home run, Park became the second player in KBO history to hit 30 home runs or more in a single season for five straight seasons. Former Samsung Lions infielder Lee Seung-yuop is the only player to have achieved this record. Lee managed to hit 30 or more home runs for seven straight seasons, from 1997 to 2003.