The control center at the Korea Power Exchange in Naju, South Jeolla, on Aug. 1 shows energy supplies on its monitors. Luckily, there have been no emergency spikes in power demand thanks to factories going on hold due to the summer vacation. [OH JONG-CHAN]

The numbers on the monitors at Korea Power Exchange’s main control center in Naju, South Jeolla, spiked to 82 million kilowatts as the temperature in Seoul hit 39 degrees Celsius (102.2 degrees Fahrenheit) on Aug. 1, the hottest day ever recorded in the city.

Luckily, power usage didn’t rise to a critical point, as power reserve rates stayed at around 15 percent largely thanks to the major manufacturing production lines being on hold due to the summer vacation.

Yet all of Korea’s thermal power plants, as well as 18 nuclear power plants, were operating at full capacity. Five of the country’s nuclear plants were on hold due to maintenance checkups.

On the other hand, wind turbines’ operation rate was only 13 percent. Wind turbines that could generate peak power of 1.35 million kilowatts were generating only 180,000 kilowatts that day. 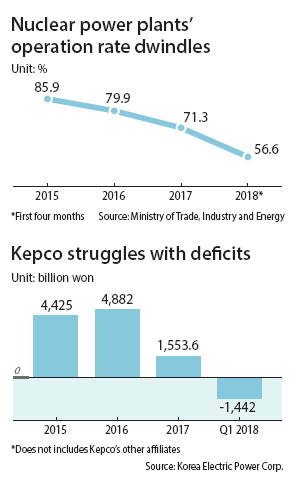 “It’s because, in the summer, there’s not much wind,” said an official at the Korea Power Exchange.

This is just one example of the state of renewable energy in Korea.

Even Korea’s solar power stations were operating at 44 percent of full capacity. Despite having 2.53 million kilowatts of capacity, only 1.12 million kilowatts was generated, even when the sun was bright. Solar panels didn’t meet their potential because their heat was too high.

The optimal temperature for solar panels to generate power is 25 degrees Celsius. Anything above that lowers the panels’ output.

At least Aug. 1 was clear. On cloudy days, the power generated from solar panels drops sharply.

The average yearly operation rate for Korean solar panels is only 14 percent, and for wind turbines it’s not much better at 20 percent.

Korea’s sunlight and wind is not sufficient to make full use of renewable energy.

According to studies by JP Morgan and the Kepco Economy and Management Research Institute, Korea’s wind resources are only 30 to 40 percent of countries with the best conditions. For solar energy, they are less than 10 percent.

The Korean government laid out a plan last year to produce 20 percent of Korea’s power by renewable means by 2030 and reduce its dependency on nuclear and coal power.

In order to fulfill the government’s plan, the best solution is to increase the number of renewable power stations. This translates to increased investment that would, in turn, increase electricity bills.

The government would likely also have to increase the number of natural-gas power plants in case solar panels and wind turbines aren’t operational due to weather conditions.

This means spending more money. Yet the government is playing down worries over higher electrical bills.

The Energy Ministry reported to the National Assembly replacing nuclear and coal power with renewable energy and gas would increase electricity bills by around 1.3 percent by 2020 and 10.9 percent by 2030.

The government said these estimates were the results of studies by experts.

The Korea Energy Economics Institute, which has been studying the expansion and influence of renewable energy, thinks differently.

It said that raising the ratio of renewable energy to 20 percent of the total would increase costs by 20 percent by 2030, in a study released in June last year.

The estimates didn’t include fuel costs and were only calculated based on unit price costs between nuclear power, coal, renewal energy and natural gas.

The Korea Energy Economics Institute said the costs could go up further if the number of renewable energy plants and electricity lines connected to the plants are increased. Maintaining natural gas plants in case of emergency will further boost costs, which be reflected in electricity bills.

The government’s estimate of a 1.3 percent hike to energy bills by 2022 is already in doubt. Last year, when the government decided to shut down the Kori 1 nuclear reactor, the overall power generated from nuclear plants fell while power generated by natural gas increased.

As a result, Korea Electric Power Corporation (Kepco) suffered a deficit, as nuclear is the cheapest form of power, and its operating losses amounted to 1.44 trillion won in the first quarter of this year. The power supplier is expected to suffer a widening deficit in the second quarter, which will pressure Kepco to raise electricity bills.

Higher electricity bills will cause a heavier burden for small and medium-sized businesses, which could worsen price competition among them.

This led to the government coming under heavy criticism for purposely lowering the maximum power demand in order to support its agenda of shutting down Korea’s nuclear power plants.

The government made it clear that its goal is phasing out nuclear power plants. It scrapped plans to build six additional nuclear power plants and decided not to renovate plants that reached the end of its life cycle. The Moon administration’s steps are seen as running against global trends.

According to a report by the International Energy Agency (IEA) released last month, the world spent $7 billion between 2013 and 2017 extending the life of nuclear power plants and expanding their capacity. The IEA also said that nuclear power plants are five times more efficient than their renewable counterparts.

“The life cycle of a nuclear plant is not the time in which the power plant starts having safety problems,” said Chung Bum-jin, a professor of nuclear engineering at Kyung Hee University. “It’s a misunderstanding.”