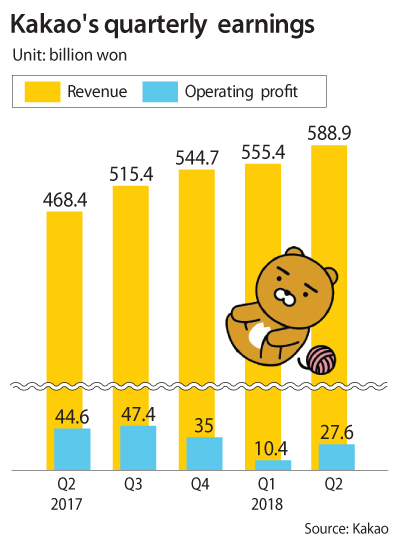 If the government eases regulations on financial company stakeholders, Kakao will consider buying an additional stake in internet-only Kakao Bank to become the largest shareholder, according to Yeo Min-soo, the tech company’s co-CEO, on Thursday.

President Moon Jae-in signaled on Thursday that changes are coming to the government’s limits on nonfinancial companies’ stakes in banks.

“If the government confirms the loosening of the policy of separating banking and commerce, we have the option to become the top shareholder through additional stake acquisition,” Yeo said in an earnings call Thursday.

Kakao Bank debuted in July last year, three months after K bank launched as the country’s first internet bank. Kakao has 10 percent ordinary shares and 8 percent preferred shares in Kakao Bank due to the regulatory restrictions. Korea Investment Holdings is the largest stakeholder, with 58 percent of the internet bank.

The regulation that bars nonfinancial stakeholders from increasing their stake in internet banks is designed to prevent conglomerates from using banks for personal purposes. This is considered one of the biggest obstacles to internet bank’s progress, as the limit prevents investors from expanding their investments, hampering further growth. Moon suggested Tuesday that the government might change the rule.

“Should Kakao continue raising its stake in Kakao Bank, an organic synergy will be beefed up, as Kakao may link Kakao Bank with several of its services, such as KakaoTalk and Kakao Pay,” said Won Jae-woong, an analyst at NH Investment and Securities.

Kakao also announced during the conference call that it would merge with its subsidiary Kakao M, the operator of Melon, the country’s No. 1 music streaming service, as of Sept. 1. The company will combine the KakaoTalk chat app with the Melon music streaming app.

“By applying Melon to KakaoTalk, we want to expand the music streaming service user demographic from the current teens and 20-somethings to those in their 40s and 50s,” said Yeo.

The company said it would also set up a new subsidiary devoted to videos and music that will be integrated with Kakao’s popular webtoon content to appeal to a global audience.

The CEO added Kakao will apply Kakao I, an artificial intelligence platform, to its navigation app Kakao Navi later this year. Kakao Navi has over 13 million users.

Meanwhile, Kakao reported that its revenue for the second quarter was up 26 percent year on year to 588.9 billion won, an all-time high, on upbeat performance from its advertising platforms. But its operating profit tumbled 38 percent over the same period to 27.6 billion won due to increased expenditures on new businesses such as Kakao Mobility, Kakao Pay and Piccoma, a subscription-based webtoon service.