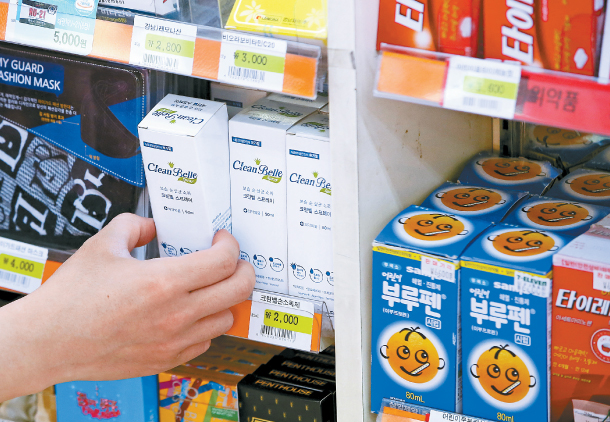 Medicine sold on shelves at a convenience store in Seoul. [YONHAP]

The battle between convenience stores and pharmacists on over-the-counter drugs continues as stakeholders fail to reach an agreement this week despite discussions having gone on for a year and a half.

On Wednesday, a 10-member committee, including medical experts and representatives of civic groups, pharmacists and convenience stores, gathered for a meeting organized by the Ministry of Health and Welfare. The aim of the meeting was to seek a consensus on permitting convenience stores to sell antacids and antidiarrheal medication over the counter.

There are currently just 13 drugs that convenience stores are allowed to sell over the counter in four distinct categories: pain killers that also treat fevers, cold medicine, digestive medicine and pain killing patches.

This was the sixth meeting the committee has held to discuss making changes to the list of drugs sold at convenience stores. The Health Ministry had also promised that the matter would be resolved in Wednesday’s meeting after earlier discussions fell apart in December when a delegate representing pharmacists pulled out a knife and threatened to stab himself.

But the intense three-hour discussion on Wednesday didn’t come any closer to reaching a conclusion.

After the meeting, the Health Ministry issued a press release saying that all sides “shared the opinion” that antacids and antidiarrheals should be added to the list in principal, but the issue would have to be discussed further at a future, as yet unscheduled, meeting. In other words, nothing was settled.

The government is trying to persuade pharmacists to allow convenience stores to sell the two new product categories by suggesting that two drugs that are currently available over the counter be restricted again. This would ensure that the number of permitted drugs remains at 13, theoretically appeasing the pharmacists.

But the pharmacists still aren’t happy. The drugs that are being proposed for over-the-counter sale - Gelfos and Smecta - are two that pharmacists say are far too dangerous to be sold by non-professionals. Although the number of drugs remains the same, the selection available becomes far more potent, according to the pharmacists.

The pharmacists are likely also concerned about their profits - Gelfos and Smecta are both steady sellers.

The issue dates back to January 2017 when the Health Ministry first suggested adjusting the list of emergency drugs sold at convenience stores to add more products that could benefit the public and pull out products for which demand was low.

Drugs were first permitted for sale in convenience stores in 2012, and the government thought it was time to review the list as the public seemed to be benefiting from the policy.

A representative body for pharmacies with the reputation of being one of the strongest interest groups in the country, the Korea Pharmaceutical Association (KPA), has been saying otherwise. Their claim is that non-professionals selling drugs will inevitably increase cases of side effects.

Apart from rallying against the sale of Gelfos and Smecta at the Wednesday meeting, the KPA representative additionally requested that Tylenol Extra Strength 500mg be pulled from convenience store shelves, arguing that it can be dangerous in cases of overdose or for drunk consumers.

“There are only 33 pharmacies that operate at night in the country,” said an association of Korean convenience store owners in a statement last week. “It’s ironic how most pharmacies avoid working at night or holidays but go against convenience stores selling emergency over-the-counter drugs.”

Civic groups have been defending consumers’ right to access over-the-counter drugs. The Citizens’ Coalition for Economic Justice, for example, has been calling for salves for skin burns and antihistamines to treat allergic reactions to be added to the range.

Meanwhile, sales records indicate that the public is benefiting from being able to purchase drugs at convenience stores. According to CU, 34.5 percent of drug sales last year were made between 8 p.m. and 12 p.m. Forty percent came during the weekends.