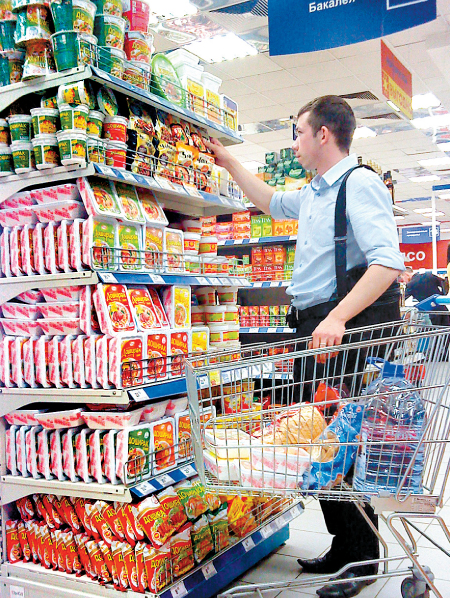 Though the popularity of ramyeon maker Paldo’s classic Doshirak cup noodles may be waning in Korea, they’re still winning over the hearts of unlikely consumers - Russians.

In the early 1990s, Paldo’s Doshirak - or lunch box - cup noodles became a huge hit in the coastal city of Busan.

The noodles’ popularity also caught the attention of sailors and merchants from Vladivostok who were trading in the port there.

Several features of the ramyeon quickly made it a hit among Russian visitors as well.

The square containers of the Paldo Doshirak resembled those that Russian sailors use to carry their soup. The relatively firm lid of the Doshirak also offered added protection against spilling, making it the ideal food to eat in ships and trains.

The Doshirak’s hot and sour flavors also appealed to Russian taste buds, serving as a welcome alternative to the soup that the Russians would have back home.

As fans of the ramyeon began introducing the product to their friends and families, the popularity gradually spread to the rest of Russia.

Last year, the ramyeon brought in 230 billion won ($205.9 million) in revenue for Paldo in Russia.

Behind the cup noodles’ huge success in Russia was Paldo’s localized marketing strategy.

Prior to launching new products, employees from Paldo visit Russia’s traditional markets and households, gathering ideas for flavors that would be popular with local consumers.

In consideration of Russians’ preference for chicken, Paldo launched a chicken-flavored Doshirak, making its soup base from a creamy chicken broth. The company also launched mushroom-flavored and shrimp-flavored editions of Doshirak.

Paldo’s Russian office now manufactures eight types of Doshirak along with three other types of ramyeon packaged in plastic wrapping. The company has two local factories with 1,000 employees.

“Benchmarking our success in Russia, we are now expanding our ramyeon export destinations to Kazakhstan, Uzbekistan, Poland and surrounding countries,” said Cho Hong-cheol, the head of the international business team at Paldo.