Approval rating for Moon sinks to low of 58%

Approval rating for Moon sinks to low of 58% 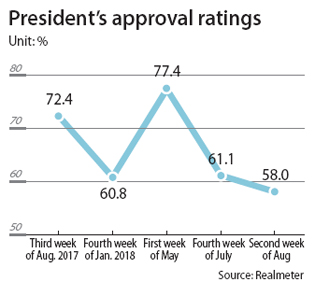 President Moon Jae-in’s approval rating dipped to a record low of 58 percent, the first time the president’s popularity fell below the 60 percent level since he took office in May 2017.

In a poll conducted by Realmeter between Monday and Wednesday of 1,507 adults nationwide, support for Moon declined by 5.2 percentage points to 58 percent from 63.2 percent a week earlier amid controversy over minimum wage hikes that have hurt small business owners and seemingly depressed new hiring across the country.

The poll had a margin of error of plus or minus 2.5 percentage points.

Moon’s approval has been falling since the second week of June, when it peaked at 75.9 percent on the back of growing expectations for a breakthrough in both inter-Korean and North Korea-U.S. relations from the June 12 Singapore summit between North Korean leader Kim Jong-un and U.S. President Donald Trump.

Although, in the first week of August, his approval rebounded to 63.2 percent from 61.1 percent a week before thanks to the government’s overhaul plan for the Defense Security Command, which drafted martial law plans early last year in case the Constitutional Court overturned the impeachment of then-President Park Geun-hye.

In short, Moon’s approval rating dropped by nearly 20 percent over a span of two months.

Moon’s second lowest approval was 60.8 percent, recorded in the fourth week of January.

The low in January was the result of his government’s hard-line stance on cryptocurrency to stem its dramatic rise, especially bitcoin, which wasn’t popular with some segments of the public.

The declining trajectory of the president’s popularity appears to have stemmed from public disappointment in a range of government policies particularly on the economic front.

Among such policies is the government’s decision earlier this week to temporarily adjust the charges for residential electricity in Korea by expanding the power usage levels for the two lowest pricing tiers. That was intended to assuage public fears over big electric bills during an unusually hot summer.

But the measure, which the government said would cut an average household’s monthly electricity bill by 19.5 percent, or 10,370 won, apparently fell short of people’s expectations.

“As the scope and format of the government’s decision to temporarily cut the electricity bill has stopped short of meeting people’s expectation [for a more drastic measure], it appears to have boosted public criticism of the government,” said the Realmeter in an analysis.

Stalled progress between Pyongyang and Washington over North Korean denuclearization has also worked against the Moon government in its 15th month in office.