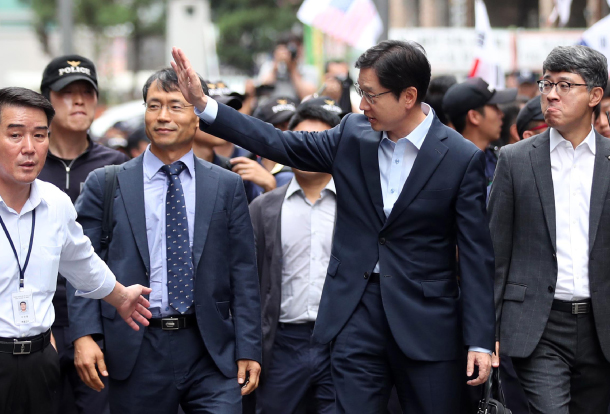 South Gyeongsang Gov. Kim Kyoung-soo waves to his supporters on Thursday before entering the special counsel’s office in southern Seoul to be questioned for the second time this week. [YONHAP]

A special counsel investigating a political influence campaign during last year’s presidential election cross-examined its two key suspects - a popular governor and a prominent blogger - at its office in southern Seoul on Thursday.

It was the first time that South Gyeongsang Gov. Kim Kyoung-soo came face-to-face with Kim Dong-won, the blogger known as Druking, since the latter’s arrest in March over allegations that he used software to manipulate opinions on social media for partisan purposes.

The two men allegedly conspired on an influence campaign to generate support for President Moon Jae-in during last year’s elections. Kim Dong-won and his associates would post comments on social media that were favorable toward Moon and artificially inflate the number of “likes” on those comments. At the time, Kim Kyoung-soo was serving as a key aide to Moon, and prosecutors believe he may have promised favors to the group in return for their help.

Kim Dong-won has been complying with investigators and providing them with crucial evidence implicating Kim Kyoung-soo after flip-flopping on a number of earlier testimonies. Handcuffed and masked, he was escorted by police from the Seoul Detention Center, where he is being held, to the special counsel’s office on Thursday afternoon.

A spokesman for the independent counsel said they would likely sit together in the same room for the cross-examination. At question is whether Kim Kyoung-soo was present at a meeting in November 2016 where Kim Dong-won and his crew allegedly demonstrated a piece of software called King Crab. Kim Kyoung-soo’s presence at the meeting would suggest that he condoned the political influence campaign engineered by Kim Dong-won and his associates.

In May, there were wide reports that Kim Dong-won attempted to negotiate something of a plea bargain with prosecutors in return for providing evidence against Kim Kyoung-soo. Although Korean law forbids plea bargains, the attempt suggests an obliging stance on the blogger’s part. In July, he voluntarily submitted key evidence in a USB drive to the special counsel.

Still, the cross-examination on Thursday indicates that the special counsel has been unable to produce decisive evidence to implicate the governor despite questioning him for over 18 hours on Monday.

Speaking with reporters outside the special counsel’s office on Monday, the governor suggested that the probe was politically motivated, a defiant claim for a politician facing investigation as a suspect.

Ever composed, Kim Kyoung-soo reiterated his stance before heading into the session on Thursday.

“I am unwavering in my position to cooperate with the counsel,” he said. “However, I hope the investigation no longer veers off course. Now that I have faithfully complied with the probe, I hope to focus my attention on the governance of South Gyeongsang as soon as possible.”

Kim Kyoung-soo is considered a darling of the Democratic Party, having served as an adviser to former President Roh Moo-hyun and a key campaign aide for Moon, which is why political analysts believe the ruling party has thrown its full weight behind Kim and why the opposition held a supplementary budget bill hostage on the floor for over a month in May to force the Democrats into approving a special counsel probe.

And with other high-profile Democratic figures mired in scandals - including former South Chungcheong Gov. An Hee-jung over rape allegations and Gyeonggi Gov. Lee Jae-myung on supposed gang ties - the party is desperate to see the investigation come to an end.