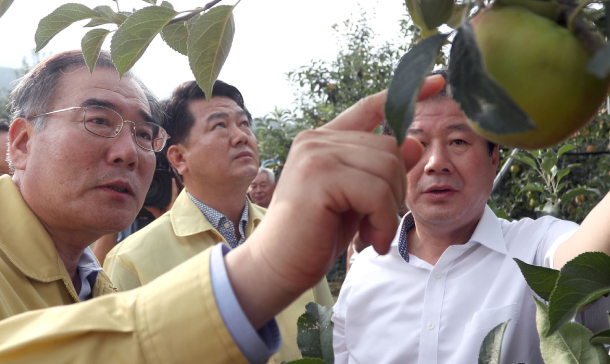 Lee Gae-ho, the new agriculture minister, visits a farm in Geochang Country, South Gyeongsang, on Friday as his first action in office to assess the damage that farmers have faced due to the recent heat wave. [YONHAP]

Lee Gae-ho has been confirmed as the new minister for agriculture, food and rural affairs, filling a position that has been vacant for five months.

Lee’s appointment came two weeks after Moon nominated him for the position.

Lee, who was a lawmaker for the ruling Democratic Party, was tapped by the president on July 26. His parliamentary hearing took place on Thursday.

During his hearing, Lee, who started his career as a civil servant after passing the public administration exam in 1980, said he would find ways to ensure the “sustainable growth” of the local farming industry by encouraging more young people to farm.

Lee’s predecessor Kim Yung-rok stepped down in March to run in the general elections in June. Kim was elected governor of South Jeolla.

Lee’s first action as agriculture minister was visiting local farms to survey the damage done by the recent heat wave.

On Friday, Lee visited an apple farm and a poultry farm in Geochang County, South Gyeongsang, both of which suffered from the prolonged high temperatures.

According to the government, nearly 300 farms in South Gyeongsang have suffered from the heat wave and nearly 200,000 animals in the region have died.