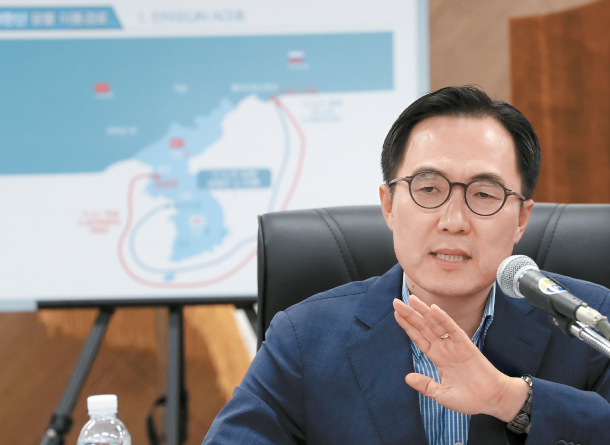 Kim Jai-il, director general of the investigation bureau of the customs agency, takes questions at the government complex in Daejeon on Friday. [YONHAP]

North Korean coal and iron has been smuggled into South Korean ports, according to the country’s customs agency.

The Korea Customs Service said Friday in a briefing at the government complex in Daejeon that it has verified seven cases involving illegal imports of North Korean resources from April to October 2017.

The customs agency explained that the people responsible transshipped North Korean pig iron and coal into the South by going through various Russian ports and declaring them of Russian origin.

“It was difficult to prove that the shipments actually contained North Korean products [because they went through Russian ports where their country of origin were falsified],” said Kim Jai-il, director general of the investigation and surveillance bureau at the customs agency. “We were able to confirm that the imports were from North Korea after one of the culprits confessed that they fixed the documents and admitted they were from the North.”

The total amount of North Korean coal and iron imported to South Korea during the period was 35,028 tons, worth 6.6 billion won ($5.86 million), according to the customs agency.

The customs agency suspects the culprits decided to smuggle North Korean coal and iron into South Korea after their prices dropped dramatically.

Lim Sang-beom, director general for nonproliferation and nuclear affairs at the Ministry of Foreign Affairs, explained that the South Korean government will report the findings to the United Nations Security Council Sanctions Committee on North Korea. The committee will determine whether it would list the ships involved on its sanctions list.

Seven ships were discovered as having smuggled North Korean coal and iron into the South while four delivered the resources after the introduction of an international resolution that prohibits the trading of North Korean natural resources.

Security Council Resolution 2371 bars the purchase of natural resources from North Korea including coal and iron. It went into effect in August 2017.

The Jin Long, a ship registered in Belize that visited Pohang, North Gyeongsang, earlier this week, shipped about 4,584 tons of coal from the Russian port of Kholmsk to the Port of Donghae in Gangwon on Oct. 26 of last year. The coal was delivered to Kholmsk by a North Korean ship.

The Sky Angel, which is registered in Panama, used the same channel earlier that month and brought some 4,100 tons of coal briquettes to the Incheon Port.

While the incidents that took place before August are not in violation of the international sanctions, they are against South Korean law.

The government implemented so-called May 24 measures in 2010, which prohibit South Korean individuals and companies from having economic exchanges with the North. Those sanctions were a response to the sinking of a South Korean naval vessel earlier that year.

Ships that delivered North Korean coal and iron before the launch of the international sanction will be subject to punishment by South Korea.

The Jin Ao, registered in Sierra Leon, Rich Vigor, registered in the Republic of Kiribati, and another Kiribati ship, the Xing Guang 5, will be banned from entering South Korean ports, according to Lim.

The Korea Customs Service could not provide the names of the companies involved in the cases other than Korea South-East Power (Koen), a subsidiary of the state-run Korea Electric Power Corporation.

For the South Korean power company, the customs agency determined that, while it used the smuggled coal, it did so without the knowledge of its origin and thus the company has not violated South Korean law.

“At this point, there is no legal ground to punish them,” said Kim.

The main opposition Liberty Korea Party called for a parliamentary probe into the case on Friday. Kim Sung-tae, the floor leader of the party, called it a “serious diplomatic issue.”

The Blue House said Friday that it would work closely with U.S. authorities, adding that there is no disagreement between the South Korean government and the U.S. government regarding the matter. Lim of the Foreign Affairs Ministry said the government had not notified the United States of the findings as of press time on Friday.