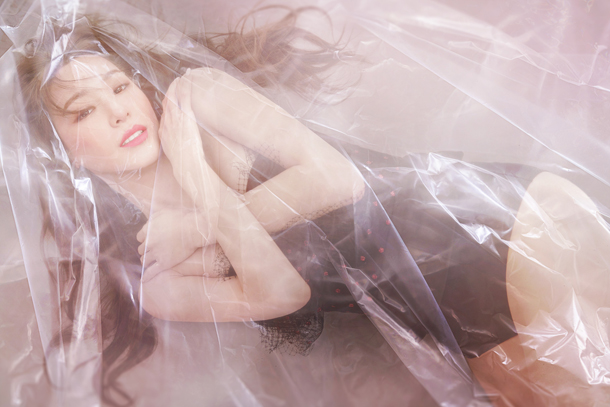 Tiffany, member of K-pop girl band Girls’ Generation, went back to the United States where she was born and raised before making her debut in Korea to pursue an acting career. [UNIVERSAL MUSIC]

Born and raised in California, Tiffany, a member of K-pop girl band Girls’ Generation, crossed into Korea at the age of 15 and debuted with the music group three years later in 2007.

In ten years’ time, her band grew into one of the best-known K-pop girl groups in the world before she broke up with her long-time management agency, SM Entertainment, in 2016 to pursue a new path in the United States.

With her experience at the forefront of the K-pop scene, Tiffany returned to the United States last year to try her luck in the American pop scene and in Hollywood.

“I am working hard every day like I went back to the days of my training period [with SM],” Tiffany said from Los Angeles in a phone interview with Yonhap News Agency conducted in Korean.

“Dreaming of [a career in] Hollywood, I am now attending an acting school and am finished with the first year,” she said, referring to her ambition to expand into the film industry in the United States.

“I also get separate lessons in dancing whenever I have time. And I was busy auditioning [for movies and TV series] from January to March,” she said of her life in the United States. “You may have to picture me living the life of Mia from the film ‘La La Land.’”

Her single “Over My Skin,” released in June with the label Transparent Arts, is the first release in the United States.

The 29-year-old wrote the lyrics and directed the visuals for the new single, which features retro R&B sounds and tells the story of a woman’s self-awakening. Starting afresh in the United States, she also adopted the revised stage name “Tiffany Young.”

“As this song was tuned to the summer season, it has a confident vibe. In this song, I wanted to combine both elements of K-pop and elements of [American] pop,” she said. “I went to South Korea because I love K-pop music, and I also love pop music here. So I thought that drawing pieces of both of them in the song would form my identity.”

Tiffany likened her new solo single to her 2012 single “Twinkle” in terms of the composition of the instrumental ensemble and sounds. The 2012 song was released by TTL, a sub-unit under Girls’ Generation, which banded her with two other members - Taeyeon and Seohyun.

Stressing her ongoing activities to promote the new single in the United States, she said, “Radio appearances are very important here. So I am doing one after another. It’s like my dream come true when [my song] plays on the radio in San Francisco, Arizona and Houston.”

“I am also doing interviews with my favorite magazines from my childhood - Rolling Stone and Billboard. Everything is very new to me here.”

Her career in the United States is only in the beginning stages, but she is determined to go to every length to pull it off, thanks in part to the support and inspiration from her longtime band mates.

One day, Tiffany told the other Girls’ Generation members of a hard day in the United States, and member Yoona encouraged her and reminded her that, “It is what you have been wishing for. Cheer up!”

“Thinking about the members gives me energy and encourages me to work harder. I want to go all the way to make it work,” Tiffany said.

On Aug. 5, Girls’ Generation marked the 11st anniversary of their debut. Three of the eight members have moved out of SM Entertainment since last year.

“Despite three members [having left,] we always believe that we can return to Girls’ Generation any time,” she said, suggesting the possibility of a further music career in the girl band.

“I am very grateful and happy because of the freedom and the belief that [Girls’ Generation] can become a band again any time. Having met early in our lives, we are friends and sisters to each other. Girls’ Generation is my family and home,” she said, adding that she is planning to host a fan meeting in Asia this fall.