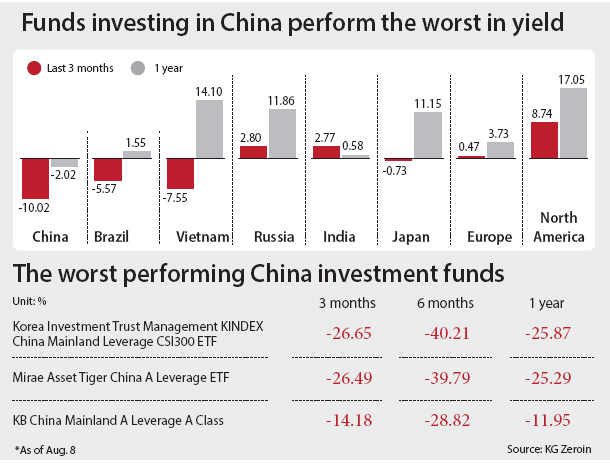 Korean funds investing in the Chinese market have struggled in recent months as tensions between China and the United States have grown.

According to the fund evaluation agency KG Zeroin, the average yields of funds investing in China in the last six months were the worst among those investing in emerging markets, at minus 13.98 percent. Brazil saw its yields fall by 12.28 percent, Vietnam dropped by 10.39 percent and Russian funds lost 4.19 percent.

The Chinese market has been struggling since U.S. President Donald Trump slapped massive tariffs on Chinese goods, sparking a trade war between the two countries.

Among the 150 funds investing in Chinese equities with net asset of over 1 billion won ($886,713), only one has profited over the past three-month and six-month periods. But even that fund’s yield was limited to 3.51 percent over three months and 1.72 percent for six months.

One of the key traits of these funds is that they are high-risk leverage funds, which means they are design to deliver profits of double the investment when the market index rises. However, when the Chinese market falls, the losses also double.

The current tensions between the United States and China make the future of the funds bleak.

“China has made it clear its plan to levy tariffs of between 5 and 25 percent on American goods worth $60 billion,” said Hong Rok-ki, a KTB investment & Securities analyst. “If the situation goes on, it has the possibility to spread to other areas like energy, and thus, China’s mainland stock market future is not too bright.”

The Chinese government recently has been taking steps to prevent the country’s stock markets from falling further with economic stimulus policies, including tax cuts, to protect its economy from the looming trade war with the United States. It is also increasing its spending on infrastructure.

Some caution about expecting early results from the Chinese government’s stimulus, as its true effect will come in the fourth quarter of this year.