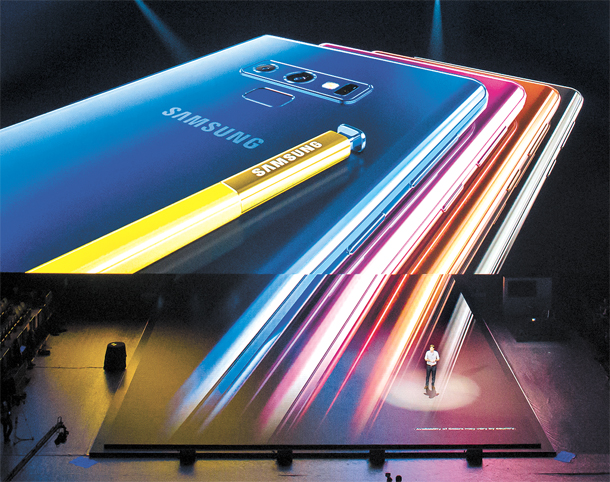 Samsung Electronics’ Galaxy Note9 is introduced to a crowd of over 4,000 people at the Barclays Center in Brooklyn, New York, on Thursday. [SAMSUNG ELECTRONICS]

Samsung Electronics unveiled its new Galaxy Note9 phablet on Thursday at the Barclays Center in New York along with a home speaker powered by the company’s Bixby virtual assistant.

“The Note has always been our showcase for premium technology and industry-defining innovation, and Galaxy Note9 is no exception,” said Koh Dong-jin, president and CEO of Samsung Electronics’ IT & mobile communications division, who presented the new device.

In appearance, the phablet itself is not significantly different from its predecessor. Its screen size is slightly bigger, at 6.4 inches, up 0.1 inches from the Note8. The fingerprint sensor was moved from the right of the camera to beneath it.

The feature that created the most buzz was the Note’s upgraded S Pen. Before, the pen’s functions were limited to writing on the screen. The new S Pen is equipped with Bluetooth, which allows it to function like a remote control for the Note at a distance of up to several feet. The stylus can last for 30 minutes on one full charge, which takes just 40 seconds inside the phablet’s stylus slot, according Samsung.

A button on the stylus allows it to take selfies, activate apps, pause and play YouTube videos and control slides during a presentation, as Samsung Electronics’ executives demonstrated during the event. More functions will be added by third-party developers as well, as the electronics giant plans to share a developer kit later this year.

The Note9 also boasts improved specs over last year’s model. It has a 4,000-milliampere hour (mAh) battery, a 21 percent increase from Note8, which the company says is enough to keep the device going for an entire day. It also offers data storage of 128 or 512 gigabytes (GB), and can accept microSD cards of up to 512GB. The 128GB model comes with 6GB of RAM and the 512GB model has 8GB.

The battery upgrade is notable, considering how the company took the safe option with the Note8 last year and decided not to push its battery storage up too much after the Note7’s batteries detonated, causing a recall back in 2016. Since then, the company has implemented a stronger verification process for battery safety.

New artificial intelligence (AI) features were added to its camera as well. The Note9 is equipped with a scene optimizer that automatically identifies whether a shot is a portrait or a landscape and optimizes its color, brightness and contrast to suit the subject. The new “flaw detection” feature immediately advises users to take another shot if a photo is blurry or a subject blinks. 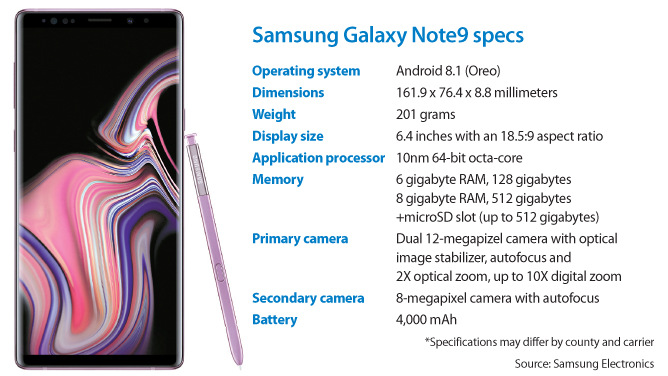 The event also marked the debut of Samsung’s new smart watch, the Galaxy Watch. It comes with a larger battery of up to 472 mAh and offers more features for tracking fitness, sleep patterns and stress.

More hype surrounded Samsung’s long-rumored home speaker, the Galaxy Home. The device, which looks like a vase covered in black fabric on three short silver legs, was unveiled for the first time at the event in New York. The Galaxy Home speakers are made by Harman, the high-end audio company Samsung acquired in 2016. The device has eight microphones so it can recognize voices coming from all directions. The company said this will also help with directing music to users’ location.

Powered by the AI assistant Bixby, the Galaxy Home is Samsung’s entry in the smart speaker market, which is currently led by Amazon’s Echo, Google’s Home and Apple’s HomePod.

“Galaxy Home also has Bixby and SmartThings hub built right in it so it gives you instant access to a large system of smart devices [at home] using only your voice,” explained Yi Ji-soo, Samsung’s vice president of AI strategy. Yi added that further details on the Galaxy Home will be shared at the Samsung Developer Conference, which is scheduled for November in San Francisco.

Another surprise announcement from the event was Samsung’s partnership with the global music service provider Spotify as its new go-to music streaming app. From now on, Spotify will be added as a default app on Samsung’s devices and will be the default music provider for Bixby. The virtual assistant will turn to Spotify to fulfill users’ requests for music.

“Samsung makes devices for every aspect of our lives - everything from smartphones and TVs, to tablets, speakers and watches,” said Spotify CEO Daniel Ek on what motivated the collaboration. “This partnership with Samsung reduces the friction for users to get Spotify up and running on multiple Samsung devices once their accounts have been linked.”

It remains to be seen whether the Note9 will succeed in pulling up the electronic giant’s earnings for mobile devices for the year’s second half. Samsung’s IT and mobile communications division saw operating profits tumble 34.2 percent year on year in the second quarter to 2.67 trillion won as the Galaxy S9 had disappointing sales. The initial second-quarter sales projection for the model was 15 million units, but it only sold 9.5 million. The company is still the No.1 smartphone vendor in the world, but Samsung is facing strong competition from Chinese rivals like Huawei.

The success of the Note9 is likely to decide the fate of Samsung’s smartphone business for the rest of the year. Local analysts gave conservative sales projections of between 9.5 million and 10 million for its first year.

“The new model has various functional upgrades, but the changes were not fundamental, as the focus was put on improving the features of the supplementary device,” said analyst Lee Seung-woo of Eugene Investment & Securities in a Friday report. “It seems hard to ensure that [Note9] will be a game changer that makes up for the S9’s sluggish results.”

Analysts also cited consumer tendencies to hold onto their phones for longer and slowing demand for high-end models as concerns that could affect the Note9’s sales performance.

Preorders for the phone will begin on Monday through Aug. 20 online and at brick-and-mortar branches of all three major local mobile carriers: SK Telecom, KT and U+. The Note9’s official launch date is Aug. 24, but preordered phones will be available starting Aug. 21.