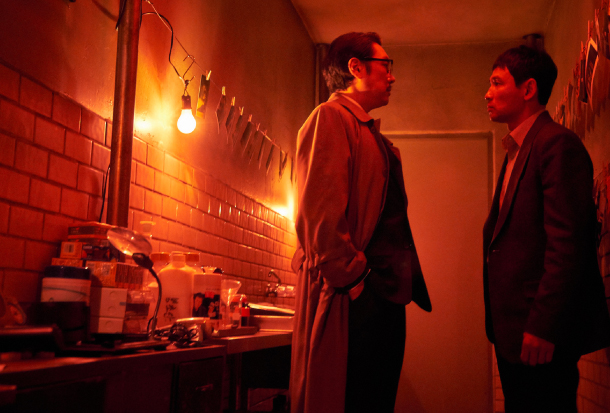 “The Spy Gone North” is another male-centered local action flick with nary a major female character in sight. But despite the skewed gender ratio, the espionage film successfully keeps audiences focused throughout its longer than two-hour running time without the lofty action spectacle like car chases or explosions, which are usual tropes in the genre.

Screened at this year’s Cannes Film Festival in May, CJ Entertainment’s release boasts an intricate plot that allows viewers without much knowledge about Korea’s geopolitical situation to be able to follow the story without much difficulty.

Directed by Yoon Jong-bin of “The Unforgiven,” which was recognized in Cannes’ Un Certain Regard section in 2005, “The Spy Gone North” steps a couple decades into the past to tell the true story of a former South Korean military officer named Park Seok-young (Hwang Jung-min) who was recruited in 1993 by the National Intelligence Service to infiltrate North Korea with the code name Black Venus.

Amid the leaks of news in 1993 that North Korea is developing nuclear weapons, Choi Hak-seong (Cho Jin-woong), the director of the South Korea National Intelligence Service (NIS), appoints Major Park to infiltrate the North Korean city of Yongbyon, where the nuclear plant is reportedly located. He is told to look into the situation and figure out whether nuclear weapons are actually being developed and whether they have been completed.

To do so, Park masquerades as an opportunistic businessman seeking to rake in money by doing business with the North. For the mission, Park resorts to watching videos featuring businessmen to learn how they speak and behave in certain situations instead of polishing up on how to use state-of-the-art weapons or bulking up to fight against his enemies.

The film later proves that Park’s efforts aren’t a waste of time as he is endlessly tested by North Korean officials - Ri Myeong-un (Lee Sung-min), who is in charge of earning foreign currency for his country in China, and Jeong Mu-taek (Ju Ji-hoon) from the State Security Department - even after Park seems to have managed to convince them that he is a bona-fide businessman whose sole aim is to earn money.

Lee, who started out as a stage actor and has proved his talent through roles in a variety of genres, once again masters the challenging role. With the slightest alterations to his facial expressions, the actor successfully creates a tense ambience and delivers a taciturn and seemingly emotionless character who cares deeply about finding a way to better the lives of starving North Koreans.

Ju, known for brighter roles like the character he played in the fantasy blockbuster “Along With the Gods” and the romance drama “Princess Hours,” also leaves a memorable impression playing the mistrustful role, although not much backstory is provided as to how the young character managed to move up the political hierarchy.

After earning trust as the man that will be able to pull in great amounts of foreign cash into the secluded nation, the Korean spy agent is invited to fly to the North Korean capital of Pyongyang to meet its then-leader Kim Jong-il, where Park proposes a joint-venture.

Played by actor Ki Joo-bong, the scenes featuring the North’s former leader is tense and frightening - Army officers march in a sharply choreographed formation surrounding Kim while a little white dog toddles along at his feet.

But with only little time left, the movie suddenly takes a different turn. This happens when Park learns that his boss, director Choi, is scheming with the North to interfere with the upcoming national election to disrupt people’s desire for a liberal government. The entire security department of the government will be revamped if the liberal opposition candidate Kim Dae-jung wins.

In return for a massive amount of money, Choi asks the North to pose a security threat to the South, through which Choi hopes to stir up voters’ hearts to discourage them from diverting from the status quo.

From this point on, the espionage film suddenly transforms into Park’s mission to prevent his boss from meddling in the national election. Though their interests collide, Park and Ri are both determined to do what is best for the people of their homelands and ultimately embrace their opposing intentions.

The sudden transformation from an espionage drama into a buddy flick is sufficiently convincing. However, some scenes demonstrating Park and Ri’s close-yet-distant relationship are so cringeworthy and awkwardly sentimental that they are almost laugh-enducing.

“The Spy Gone North” starts off grave with a focus on the tense political relations between the divided Koreas but ends on a lighter tone, focusing on conflicting individuals with different ideologies. Ultimately suggesting hope for improved relations between the South and North, this is a timely movie that fits well during the historic warming in South-North relations.