Table tennis darling gets his groove back

Table tennis darling gets his groove back 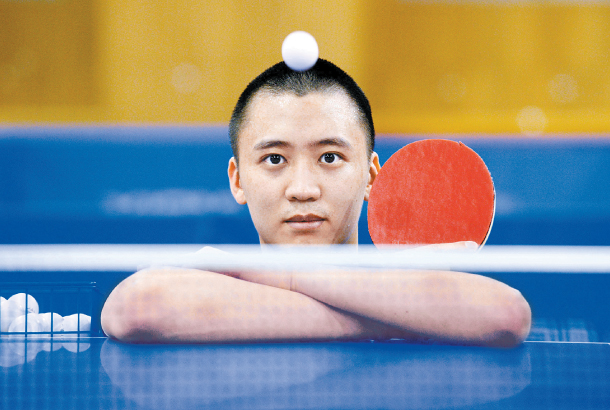 He’s never won a gold medal at the Olympics or Asian Games, but Jeoung Yong-sik is a familiar name in Korean table tennis for his aggressive playing style, especially against the formidable Chinese team during the 2016 Rio Olympics.

That August, Jeoung failed to medal in the men’s team event and men’s singles, but his performance against the Chinese players left a strong impression on Korean fans, making him a new star in Korean table tennis.

Now, two years after Rio, Jeoung hopes to get that attention again, and this time by winning two golds at the Asian Games.

“This is the first time since high school that I shaved my head,” Jeoung said at the National Training Center in Jincheon County, North Chungcheong. “I want to focus only on table tennis. Before competing in a big event, I want to clear my mind [and only think about] my goal of winning a gold medal. Shaving my head doesn’t really change anything, but I want to give some change to myself.” 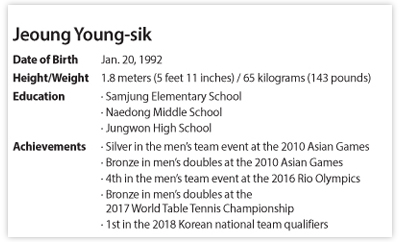 After the Rio Olympics, Jeoung went through a slump, and he was slowly forgotten in Korean table tennis.

The first hurdle was an injury to his right wrist from overly rigorous training — he used to practice from 6 a.m. to 10 p.m. every day.

The injury put Jeoung out for four months. Once he recovered, he hoped to perform at the level he was during the Olympics, but instead, he struggled even more, failing to get past the first round in men’s singles at the 2017 World Championship. His world ranking, once as high as seventh, dropped to 109th at one point.

Jeoung continued to work on his recovery and finally hit his stride this year when he came in first at the national team qualifiers for the Asian Games.

“Although I recovered, when I was losing a lot, I started thinking that I didn’t want to play table tennis for the first time,” Jeoung said. “But after going through that rough time last year, I now have stronger passion for table tennis and have a clearer goal.”

It’s been a long journey getting back on the national team, and Jeoung only wants to focus on table tennis. He’s not giving himself a day of rest from the sport, staying at the National Training Center even on weekends to practice his serves and squeeze in more weight training.
“When I’m resting, I watch clips and just leave them on so I can hear the sound of the ball,” Jeoung said. “When I’m not doing anything, I have the ball in my hand. Aside from the time I eat and sleep, everything is about table tennis.”

But the memory of his injury is still seared in his mind. To strengthen his wrist and gain more flexibility, Jeoung has been training with a 900-gram (2-pound) baseball bat.

Throughout Jeoung’s career, he managed to be an elite table tennis player, but when it came to international events, he always struggled to perform. Because of this, he was regularly dismissed as a domestic competitor.

In 2010, Jeoung competed at his first Asian Games at the age of 18 and won silver in the team event and bronze in men’s singles. At the next Asian Games, Incheon 2014, he failed to qualify for the national team.

Since Jeoung received all his fame from the Rio Olympics, he believes that single event was his turning point.

“Before the Olympics, I only thought of becoming successful by making a lot of money and gaining honor,” Jeoung said, “but I learned a lot from the attention, from the cheers I received from fans.”

At the Asian Games this month, Jeoung will compete in two events — the men’s team event and men’s singles — and he feels more responsibility than ever to win against powerhouse China.

“During the Olympics, I couldn’t get past China, but this time at the Asian Games, I’ll get past them in both the team event and singles,” he said. “Since my ultimate goal in table tennis is to become the world champion, I’ll never give up.”