A German artist with an interior sensibility: Photographer Candida Hofer has a solo show at the Kukje Gallery

A German artist with an interior sensibility: Photographer Candida Hofer has a solo show at the Kukje Gallery 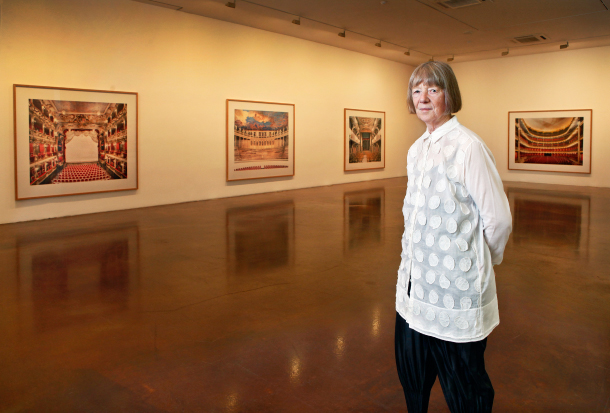 Candida Hofer, 74, one of the biggest names in contemporary photography, stands on July 27 at Kukje Gallery in central Seoul where her solo exhibition “Spaces of Enlightenment” runs until Aug. 26. [PARK SANG-MOON]

Candida Hofer, 74, one of the biggest names in contemporary photography, is best known for photographs of interiors of public buildings such as libraries, museums and theaters without human presence in them. Some of them are now on view at a solo exhibition “Spaces of Enlightenment” running at the Kukje Gallery in central Seoul until Aug. 26.

On the first floor are works by the German artist that capture the interior spaces of theaters. They include a 2010 photo of Teatro Olimpico Vicenza, a 16th-century Italian indoor theater whose trompe-l’oeil paintings on the ceiling and walls generate the illusion of an ancient Greco-Roman outdoor theater’s open spaces. There are also 2016 photos of the German contemporary concert hall Elbphilharmonie Hamburg by Swiss architecture firm Herzog and de Meuron, whose interior might remind the viewers of a stadium rather than a traditional theater.

On the second floor are Hofer’s photos of interior spaces in libraries and museums, ranging from Baroque libraries full of colorful books and murals in monasteries from the Middle Ages to simple, white, modern bookshelves in the Kunstakademie Dusseldorf, where the artist studied photography in the 1970s under Bernd and Hilla Becher, conceptual artists and photographers important in 20th-century art history.

“Paradoxically, although devoid of humans, Hofer’s works show a better human presence symbolically through the spaces and their details created and used by humans that imply both material and spiritual aspects of European modernity,” said art critic Sumi Kang. “The photos, mostly in large formats, invite the viewers calmly and slowly explore the details and the overall spaces made by the details in their macro-microscopic worlds.”

In addition, as Hofer repeatedly called her works “portraits of the spaces” in past interviews, the photos of the spaces could be compared to portraits of humans whose faces are apparently expressionless but whose characters and the years they have spent are recognizable through detailed features exposed in shades of natural light.

Asked in a press preview in Seoul late last month why most of her photographs are devoid of humans, the artist said, “First, I don’t want to give any inconvenience to people who use the public spaces. Second, we can perceive a space better when it is unoccupied.”

Her wish not to trouble people as well as her insistence on using only sunlight or the artificial illumination originally installed in the spaces is visible in her photos of the Bibliotheque Nationale de France (National Library of France) on display on the second floor. Exceptionally, they include some people in the library spaces.

“I would photograph before the opening or after the closing of the public spaces, but when I took these photos, the sunlight and the library lights were not sufficient for photographing in these hours, so I had to work during opening hours,” she said.

One of Hofer’s early important series featured people: Turks living in Germany and Turks living in Turkey respectively in the 1970s. But the series does have connections to her later photos of interior spaces devoid of people, the artist explained.

“Doing the series, I saw how people organize their spaces such as homes and shops depending on their backgrounds and situations; for example, grocery shops operated by Turkish immigrants in Cologne had a German store’s frame but the decorations and arrangement of goods within them were not German style,” she said. “I got interested in humans’ social interactions with spaces. They are more clearly visible when the spaces are absent of people.”

So, in the 1980s, Hofer moved on to the interiors of public spaces. At the same time, she converted from a compact camera to a large plate camera on the advice of her professor Bernd Becher. Now, the artist and other students of Bechers like Thomas Struth, Thomas Ruff and Andreas Gursky are considered to be the first generation of the “Becher class” and are among the most influential figures in contemporary photography as fine art.

The Korea JoongAng Daily sat with Hofer for an interview. Here are the excerpts. 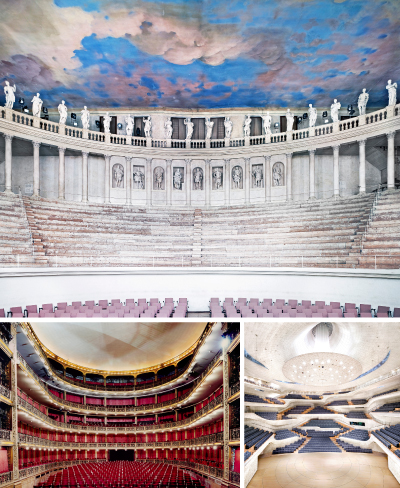 Clockwise from the left above, Hofer’s photographs “Teatro Cervantes Buenos Aires I”(2006), “Teatro Olimpico Vicenza”(2010) and “Elbphilharmonie Hamburg Herzog and de Meuron II”(2016) are among the exhibits. The German artist is best known for photos of the interior spaces of theaters, libraries and museums - public buildings connected to culture and knowledge.[KUKJE GALLERY]

Q. I know why you evolved from photos featuring humans to photos of interior spaces absent of humans. Still I’m curious what the trigger point for change was.

A. The Turkish people were favorable and helpful to me, but I reached the self-reflection that I was giving nothing to them in response with my art... I was just making use of their images for my art. I felt guilty. The skepticism about the series got strengthened, when I started the next series - photographing Germans in Germany - at homes, shops and parks, just like I did in the series of Turkish people. But the reactions by Germans were mainly negative and skeptical. It underlined my skepticism about the project, so I finished featuring people.

You have focused on human-made spaces and objects. You are not interested in nature?

I feel more secure in spaces that have walls because the walls help me make my decisions. If I photograph in nature, I wouldn’t know where to stop. I tend to take photo of each space near one wall so that the opposite wall is centered. As for theaters and opera houses, I photograph in three directions; toward the stage from the seats; toward the seats from the stage; and toward a wall of balconies from the opposite wall of balconies.

Do you research the histories of public buildings before you start shooting their interiors? And what is the main element for you in choosing a place?

The important thing is the space itself. After a space has passed a kind of test as to whether it is worth being photographed, in-depth reading and study about the space comes. It usually takes quite long until I actually take photographs of the space from the moment I first see the place. The main element I consider when I select a space first is a more emotional thing. I have to have the feeling that this is a space that touches me.

Hofer’s photographs “Dusseldorfer Schauspielhaus I”(1997) and “Van Abbemuseum Eindhoven VI” are also among the exhibits.[KUKJE GALLERY]

But your works don’t look emotional. They seem to be detached from emotions, though they give a feeling of the sublime.

And when I print tests, when I have to decide on the intensity of the colors, I prefer a cooler approach, prefer coolness to warmth.

For many of your photo works, you use large formats. Is that for allowing the viewer to see every detail and to give a feeling of the sublime?

To allow the viewers to see the whole structure in addition to details. The large format allows you to get lost and fascinated by the details but at the same time enables you to view the overall structural space.

I began to use large format, with the developing technology allowing it. And there was a trigger moment. When I was preparing for a library book, I went to Trinity College Library in Dublin. I remember the moment that I was on a gallery of the library looking down the hall of the library. Then, I told my assistant ‘This needs a large format.’ [The 2004 photo of Trinity College Library is one of Hofer’s iconic works.]

But not all of my works are large format, as you see in this exhibition. Certain types of photographs need certain sizes. Some spaces need larger sizes.

You have focused on the interiors of libraries, theaters and museums in Europe. Have you ever dealt with such buildings in other cultures such as Korea or other East Asian countries?

Many of my photographs are taken in Italy, Spain and Portugal, as well as Germany where I live. It is because they have beautiful spaces and it is easier for me to arrange photographing in the spaces as they are closer to where I live and relatively familiar to me. I have traveled to Asian cities and found they are very attractive. However, it was difficult for me to slowly experience the spaces and take photos of them. As I said before, my work requires some time.