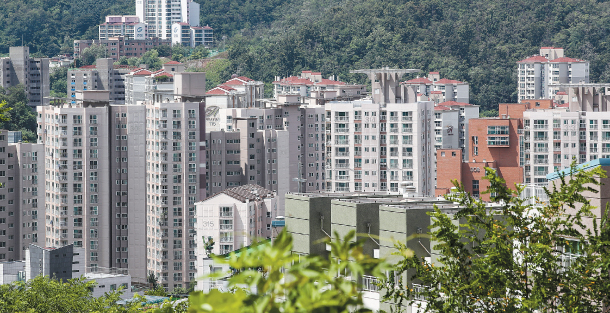 A view of an apartment complex in Eunpyeong New Town, Eunpyeong District, northern Seoul on Sunday. Apartment prices in the district posted the largest growth in Seoul of 0.28 percent week on week in the second week of August as investors pin hopes on the beginning of construction of GTX-C, a railway that will link major areas in the Seoul Metropolitan Area, and the extension of the Shinbundang line to the area. The area in Seoul that saw the second-largest apartment price hike during the week was Yangcheon in western Seoul at 0.25 percent. Both Eunpyeong and Yangcheon were not traditionally popular areas among real estate speculators before. Seoul apartment prices, meanwhile, grew for six weeks in a row since June 29 despite the government’s efforts to cool off speculation, according to Budongsan 114, a real estate information provider. [YONHAP]