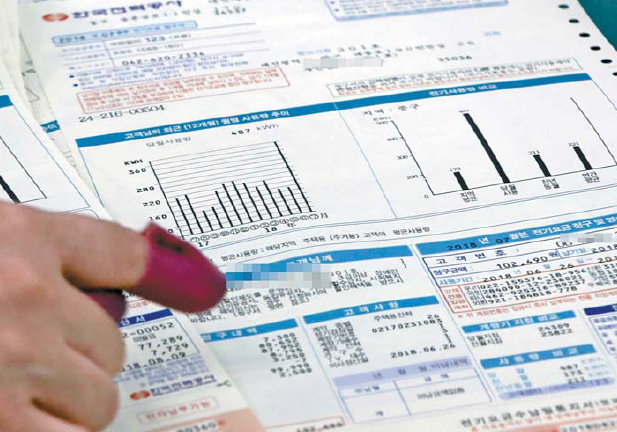 Korea’s electricity billing system has been a hot topic this summer as record temperatures forced many to run their air conditioners for longer than they expected.

Scared about the July electricity bills set to arrive on their doorsteps, Koreans urged that the government slash utility costs, at least temporarily. President Moon Jae-in answered the public’s pleas and ordered the Ministry of Trade, Industry and Energy to come up with a plan to lower power costs.

Here are the basics on how Korea’s electricity billing system works and how the government is helping out with the bills this summer.

Q. How does the electricity pricing system charge users?

Korea Electric Power Corporation (Kepco), a state-run utility firm under the Energy Ministry, is responsible for distributing electricity and sending bills to households.

Kepco charges users based on three categories. The rate charged for electricity increases progressively based on the amount used.

For users who exceed 1,000 kilowatt hours a month, 709.5 won is charged for every kilowatt hour used over that limit.

An additional flat fee is also added to bills based on the usage bracket households fall into. 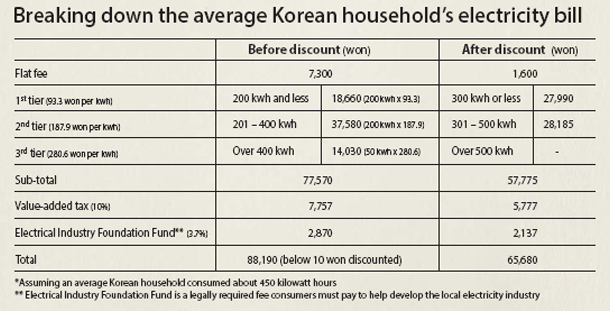 Q. How is the government planning to help households with their electricity bills?

The government is pushing up the ceiling for the first two pricing tiers for July and August by 100 kilowatt hours.

According to Paik Un-gyu, the energy minister, average Korean households will get a discount of 19.5 percent on their bills in July and August. In total, the government will end up cutting the cost of electricity for the two months by as much as 276.1 billion won.

Although this is good news for average Koreans, Kepco will end up paying the price. It’s likely that the power company will have to cover the costs, at least for the time being, until the Energy Ministry compensates the company.

Q. Has it ever offered discounts on summer electricity bills before?

The government offered similar temporary discounts back in 2015 and 2016.

Back then, the pricing system had six incremental rates rather than three. This system was overhauled in the winter of 2016.

The government gave an additional 30 percent discount of up to 16,000 won to households living on government support, those with multiple children and people with disabilities that year.

In 2016, the government used one similar to the method the Moon government decided to adopt. But unlike this time, consumers were given discounts for three months from July to September, just like in 2015.

Q. What bracket would an average household fall into?

The average urban four-member household in Korea would fall into the second pricing tier. According to the Energy Ministry, about 15.12 million households fall into this category, accounting for 65 percent of Korea’s population.

The government estimated the average July energy consumption at 450 kilowatt hours, which would cost 88,190 won. But thanks to the government’s discounts, households will see their bills reduced by 25.5 percent, or 22,510 won, to 65,680 won.

Some Koreans are unsatisfied with the discounts offered.

They argue that most households will actually receive a reduction of only about 10,000 won on their bills, which they say is not enough.

Many are calling on the government to get to the bottom of the issue and completely overhaul the current electric pricing system, not just offer discounts for July and August. 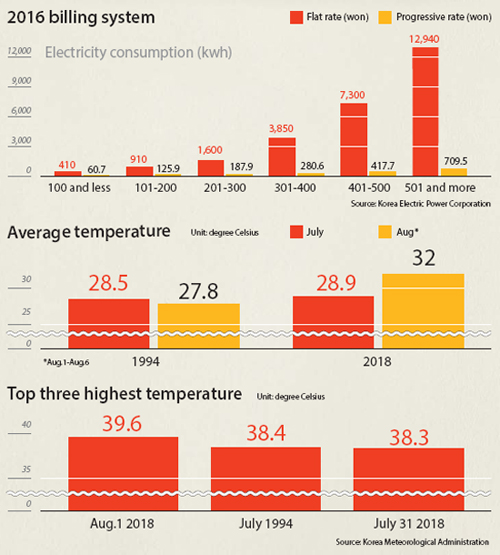 Q. Why do some people want to reform the billing system?

This summer heat this year has been the worst since temperatures started being recorded in Korea 111 years ago. According to the Korea Metrological Administration, Seoul’s temperature on Aug. 1 rose to 39.6 degrees Celsius (103.2 degrees Fahrenheit), a new record high, breaking the previous record of 38.4 degrees Celsius, which was recorded on July 24, 1994. The heat wasn’t only unbearable during the day. For the 17 days leading up to Aug. 6, the temperature between 6 p.m. and 9 a.m. never dipped below 25 degrees Celsius. Because of the heat wave, people resorted to air conditioning at night, leading to fears of massive electricity bills.

The main reason some people want to completely overhaul the billing system is because it’s likely that this year’s sweltering summer will not be a one-off. Korea’s summers will likely become longer and hotter due to global warming.

The government estimated that when the same urban family of four runs their air conditioner for more than 10 hours a day, their power usage would hit 904 kilowatt hours for the month. If so, their household electricity bills would quadruple to 232,055 won, a huge financial burden, especially for low-income families.

Others argue that Kepco was charging average households too much compared to the rates charged to companies.

According to the energy consultant company Enerdata, Korea has the world’s seventh-largest electricity demand, consuming a total of 534 terawatt hours last year. Korea’s is also the second-fastest growing country after Turkey in terms of electricity consumption. This is largely due to the huge amount of electricity used for industrial purposes.

Kepco estimates that, since 2015, industrial electricity consumption accounted for 56.6 percent of total use while households only used 13.6 percent. The rest was electricity used for commercial purposes, such as at restaurants and commercial buildings.

Industrial electricity prices change according to the season - summer, spring, fall and winter all have their own rates. The same system applies to commercial power supplies.

Q. What did the government do to change the system back in 2016?

The biggest change the government made was simplifying the billing tiers by reducing the six categories into three in November 2016. The new system charged a maximum rate of 709.5 won per kilowatt hour for those who use more than 1,000 kilowatt hours of energy a month.

It was the first change to the electricity billing system in 12 years.

The progressive electricity billing system was adopted in late 1974 in an effort to control the use of electricity, as at that time Korea’s electricity supplies were insufficient and unstable. It is a system designed to ward off excessive energy use by increasing the financial burden households face. But due to economic reasons, this billing system was not adopted for industrial and commercial purposes.

Originally, the progressive electricity billing system had three stages. In 2004, it was split into six tiers before switching back to three in 2016.

This was largely because of a heat wave which, in 2016, hit households in August. Under the 2004-2016 system, households that ran air conditioners for an average of three hours a day were slapped with bills that topped 200,000 won. The six billing categories had a wide gap between them. The lowest level cost 60.7 won per kilowatt hour while the highest charged 709.5 won, or 11 times more per kilowatt hour.

The government also slashed electricity bills for schools and kindergartens by 50 percent during the summer and winter of 2016.