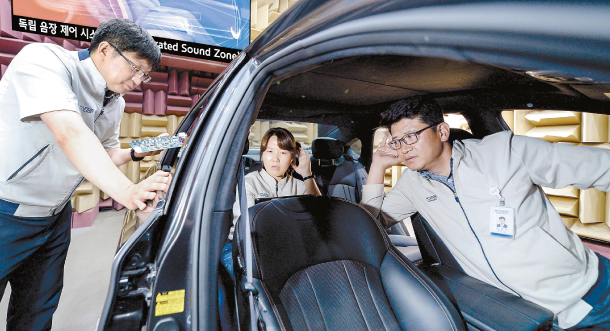 Ih Kang-duk, a research fellow, right, at Hyundai Motor, and his colleagues demonstrate the new sound system called separate sound zone, in which passengers can listen to their own music unheard by others. [HYUNDAI MOTOR]

Hyundai Motor has developed a sound system for vehicles in which passengers and the driver can hear different songs or make totally private phone calls.

It is the first such system in the world, the carmaker announced Sunday, and will be offered in Hyundai Motor cars within a year or two.

Korea’s largest carmaker calls the system a “separated sound zone” and unveiled it on its official website and on YouTube last Sunday.

Separate sound zones are created by the artful placement of different speakers. There is also software that control the sound’s reflective wave and output level, the carmaker explained.

Playing different types of music is the most basic thing the sound zones can do, according to the carmaker.

A driver or passenger could have a private phone call as well. Calls on speaker are usually heard by all people in the car.

With the system, passengers can enjoy individual choices of music while retaining the ability to converse among themselves, which isn’t possible if they are enjoying private music with earphones.

Sounds that are necessary to the driver but that are disturbing to other passengers can be controlled too, such as audible directions from the navigation system or warning sounds from the driving assistance system.

Music or direction guides that a driver is listening to won’t be heard by a sleeping child in the back seat.

Hyundai Motor said it started developing the system in 2014 and is almost ready to install it in mass-produced cars.

“This sound system will become necessary as the autonomous driving era nears and demands for entertainment inside a car evolve,” said Ih Kang-duck, a researcher in charge of developing the system.