While sales figures and the charging infrastructure for EVs in Korea falls well behind other countries like Japan and the United States, micro electric vehicles are proving surprisingly popular.

Renault’s Twizy has become the global poster boy for these mini EVs. In Korea, 984 of the tiny Renault Samsung Motors’ cars were sold in the first half of this year, nearly double the number sold in the previous half. Globally, an average of about 1,300 Twizys are sold every six months, which means that nearly 90 percent of global sales took place in Korea this year.

In fact, the Twizy is so popular here that the French headquarters is considering moving some of the assembly line from Spain to Korea.

One of the biggest benefits of micro electric vehicles, like the Twizy, is that they do not require a new charging infrastructure. The vehicles can be charged through any standard 220-volt socket - it takes 3.5 hours and costs about 600 won ($0.53) to fully charge the battery.

To foster the industry, the government in June categorized electric micro cars in the compact car segment, giving new legal grounds for diverse R&D activities and the establishment of better safety standards.

Seizing on the opportunity, multiple midsize companies have jumped on the bandwagon and are introducing increasingly souped-up micro electric vehicles.

Daechang Motors, manufacturer of the infamous Yakult cart in Korea, started mass producing a two-seater electric vehicle called the Danigo in March. The new model costs only about 5 million won for Seoul residents after subsidies, one of the cheapest models on the market.

Semisysco, another midsize company, has been selling a two-seater electric vehicle called the D2 since February. The D2 is manufactured by Chinese firm Zhidou, and Semisysco is in charge of importing them. From later this year, however, Semisysco is planning on manufacturing them in Korea.

“The micro e-mobility industry has even more possibilities than traditional electric cars in Korea at the moment,” said Kim Pil-soo, an automotive engineering professor at Daelim University College in Gyeonggi.

“It has a lower entry barrier from both manufacturers and customers. It is definitely a fledgling industry now but has a lot of potential to grow,” he added.

Upon the government’s announcement on the renewed car segment categorization, institutions that rely on delivery have quickly started to adopt the micro electric vehicles to replace their motorbikes and scooters.

Just last month, the postal delivery service pledged to buy 1,000 micro-electric vehicles to replace its two-wheeled delivery vehicles this year. It said it will replace 66 percent of its current 15,000 two-wheeled vehicles into micro electric cars by 2020.

“About 300 accidents are reported per year while delivering post,” said Sunwoo Hwan, an official at Korea Post.

“It mostly results in the driver being severely hurt. In that sense, micro electric vehicles are much safer for delivery drivers,” Sunwoo added.

Operation costs are also as advantageous when utilizing micro electric vehicles, according to the official.

“For two-wheeled vehicles, we estimate the life span to be about three to four years,” the official said. “For micro e-mobility, we estimate them to last about eight years. The initial cost may be more expensive but not if you see it in the long term.”

Fried chicken franchise BBQ has also signed a memorandum of understanding with Renault Samsung Motors to use their Twizys to deliver chicken. It said it will gradually implement a total of 1,000 Twizys within this year.

“On top of enhanced safety compared to two-wheeled bikes, micro electric cars are extremely cost-effective because it costs about 20,000 won to 30,000 won in charging fees per month,” the chicken company said in a written statement.

Korea, known for its top-notch delivery service, will continue to take advantage of the new option in the delivery method.

“Demand for delivery food is on a constant rise, and we decided to use Twizy to enhance the convenience of the customers and the staff as well,” a spokesman at SPC Group said. 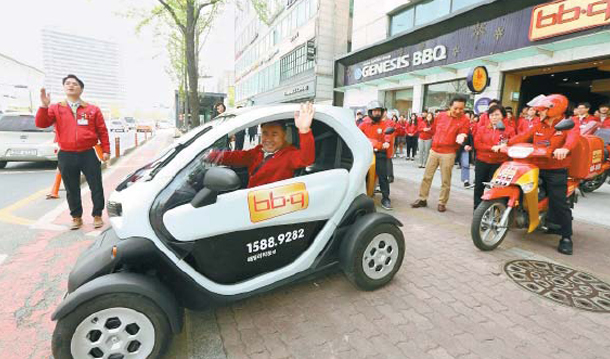 Traditionally, cars are purchased at offline dealerships where a long consultation with a talkative dealer is inevitable. Manufacturers of micro electric vehicles are shifting the retail landscape by offering the cars online and in discount stores.

Daechang Motors has been offering its Danigo vehicle on e-commerce platform TMON since January. It first put a limited 100 units on the platform, but they sold out in two days. It added 200 more units afterwards but they sold within a day as well.

On the back of such popularity, Daechang Motors is currently offering its cars only through TMON.

Semisysco is also opting for an online platform to enable easier access to the car.

It started offering its electric vehicle D2 through Interpark in July.

It has also signed a partnership with Emart, Korea’s largest discount chain, to display its vehicle along with other household products. The D2 is available at 21 Emarts and other affiliated stores nationwide.

“The largest number of orders is through Emart,” a spokesperson for Semisysco said.

“Its price is not burdensome. People who come to the discount store to shop for other products can casually look around, and sometimes that leads to purchase decisions,” the spokesman added.

Renault Samsung Motors and Semisysco said a majority of their cars’ purchases were made for individual use, such as commuting.

Despite the economic value and agility on narrow roads, it’s not all plain sailing in a micro electric car.

Under current regulations, vehicles that cannot travel faster than 80 kilometers (50 miles) per hour are not allowed to drive on highways or roads that are built exclusively for cars.

Although this might not be an issue for short commuting within metropolitan areas, it means that long-distance driving on the weekends or on holidays will not be possible with these miniature vehicles.

Ultimately, this is the same hurdle that conventional electric cars face when trying to expand in Korea.

Price could also be an issue for some potential customers. An average price of 9 million won may be cheaper than conventional electric vehicles, but with that money, people can also buy a compact internal combustion engine car from domestic carmakers or a small sedan from a secondhand car market.

“A subsidy needs to be maintained or expanded in order to further foster the industry,” said Kim. “This segment is completely new and people’s awareness is still lacking,” he added.