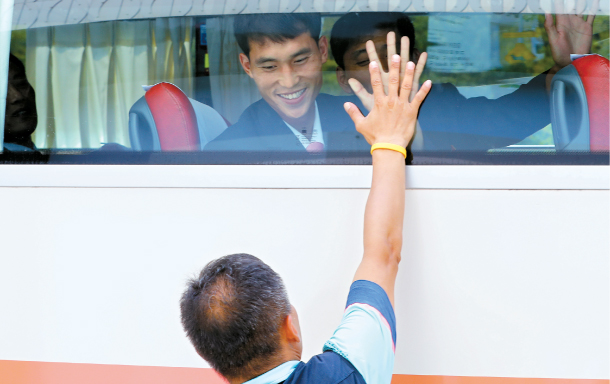 A North Korean delegation departs from the the Grand Walkerhill Hotel in eastern Seoul Sunday to return home after competing in a friendly inter-Korean football match. The North’s General Federation of Trade Unions kicked off the three-day visit Friday and competed Saturday in a rare match with South Korean labor groups. [NEWS1]

North Korea reproached the South on Sunday for siding with the United States’ “sanctions scheme” against the regime, saying such “blind obedience” was hampering progress in fulfilling the Panmunjom Declaration signed by the leaders of the two Koreas on April 27.

The critique came a day before relatively high-level officials from both countries were scheduled to meet in the truce village of Panmunjom. Local analysts believed the regime was sending a message in advance.

Uriminzokkiri, a North Korean government-run propaganda website that caters to audiences outside the country, said ongoing South-North cooperation in various fields wasn’t leading to substantial improvement in bilateral relations and fell short at “forming the atmosphere” for it.

This was so, read the article, because Seoul was handling inter-Korean ties within the realm of internationals sanctions controlled by the United States.

Pyongyang specifically vented its frustration about modernization work on North Korean railways and roads that South Korea agreed to assist, saying Seoul was only interested in aspects of the project that “don’t require money,” such as joint research. Seoul is refusing to take the initiative any further at this point, saying that the “conditions” haven’t been met yet, read the article.

“South Korea’s repetitive mention of ‘conditions’ refers to the point when the United States and the United Nations ease their sanctions against the North, or in other words, when the North gives up its nuclear weapons,” read the Uriminzokkiri article. “They’re stoically lying beneath the persimmon tree, waiting for a ripe persimmon to fall on its own.”

The Blue House said Sunday that the meeting, which was requested by the North last Thursday morning, was expected to decide on the time and venue for South Korean President Moon Jae-in’s third summit with North Korean leader Kim Jong-un.

Seoul believes that another leaders’ meeting will help resolve an impasse in ongoing Pyongyang-Washington denuclearization talks. According to the New York Times last Friday, the North is insisting that the U.S. declare a formal end to the 1950-53 Korean War, which ended in armistice, not a peace treaty, before providing a detailed, written disclosure of its atomic weapons stockpile, its nuclear production facilities and its missiles.

Citing unnamed American officials familiar with the talks, the Times reported that the North has not even agreed to provide that list during private exchanges with U.S. Secretary of State Mike Pompeo.

Washington has insisted that a formal declaration ending the war could only come after North Korea’s denuclearization.

Satellite imagery from 38 North, a North Korea analysis website, showed last Thursday that work was ongoing on a secondary cooling system for the five-megawatt reactor at the regime’s Yongbyon nuclear plant, its main nuclear site.

“A low-flow discharge is observed coming from the pre-existing cooling water outfall pipe,” the website wrote, citing satellite photos from July 31, “indicating the reactor is most likely not operating but that residual heat from earlier reactor operations is being dumped.”

The images also revealed continued vehicular traffic in and around the reactor.