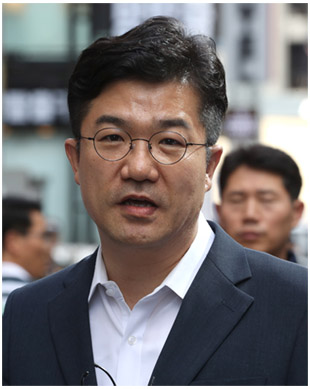 “I came here as a witness after the probe team requested me to appear for questioning,” Song said on Sunday morning before entering the special counsel’s office in southern Seoul. “I will faithfully answer the questions as facts stand.”

Song did not answer a question from a reporter about whether he knew Kim Dong-won engaged in a political influence campaign.

Both Song and Kim Kyoung-soo are close confidantes of President Moon Jae-in. Song’s relationship with Moon dates back to the early 1990s when he began his political career as an assistant to Roh Moo-hyun, who later served as president from 2003 to 2008.

Moon was Roh’s chief of staff.

Song’s alleged connection to the case involves a meeting between Kim Dong-won and Kim Kyoung-soo, who was one of Moon’s campaign aides during last year’s election. Song introduced the two men, according to the presidential office.

The Blue House also found in its internal investigation that Song had also received 2 million won ($1,770) for lectures he gave to a study group run by Kim Dong-won.

In their political influence campaign, Kim Dong-won and his associates would post comments on social media that were favorable toward Moon and artificially inflate the number of “likes” on those comments. The special counsel believes Kim Kyoung-soo, as an aide to Moon, might have promised favors to the group in return for their help.

Kim Kyoung-soo later recommended one of Kim Dong-won’s associates, a lawyer identified by the surname Doh, for a consular position in Japan, according to prosecutors.

While the independent counsel did not announce details of the Sunday questioning, analysts expect them to press Song over why he introduced Kim Dong-won to Kim Kyoung-soo and whether the blogger asked Song to bring his associates onto Moon’s campaign team.

The questioning comes as the ruling Democratic Party and opposition Liberty Korea Party have locked horns in the legislature over extending the special counsel’s mandate for another 30 days.

The probe, led by Huh Ik-bum, a former prosecutor, launched on June 27, and its mandate ends on Aug. 25. Huh can formally request an extension for another 30 days, but it has to be approved by the president, who is considered an ally of Kim Kyoung-soo.

Members of the opposition party could hold bills in the National Assembly if Moon decides not to extend the independent counsel’s mandate. Kim Sung-tae, floor leader of the Liberty Korea Party, contended on Friday that the counsel had uncovered less than half of the truth in its investigation so far.

The Democratic Party’s chairwoman, Choo Mi-ae, said the opposition was “only preoccupied with making political attacks by extending the probe.”

Kim Kyoung-soo is considered a darling of the Democratic Party, having served as an adviser to former President Roh and a key campaign aide for Moon, which is why political analysts believe the ruling party has thrown its full weight behind him.

Attention now turns to whether the independent counsel will request an arrest warrant for Kim Kyoung-soo.