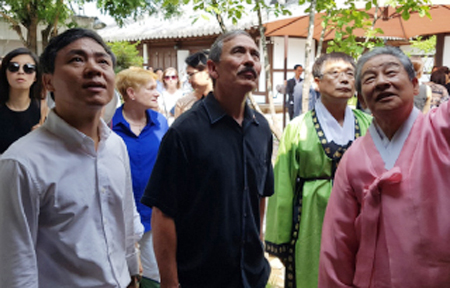 U.S. Ambassador to Seoul Harry Harris visited Seunggwangjae in Jeonju, where a descendent of the imperial family of Korea lives.

Lee, 77, has been living in Seunggwangjae, a house in the hanok village of Jeonju, since 2004. It serves as both his residence and a museum where Lee gives lectures about the history of the royal family of the Joseon Dynasty.

It was the first visit by an American ambassador.

Harris was accompanied by his wife Bruni Bradley on Tuesday, part of a two-day visit to the city to partake in a Jeonju-U.S. culture week called “Experience America” hosted by the U.S. Embassy and the Jeonju city government at the Jeonju Hanok Village from Aug. 6 to 10. The week’s program included Jeremy Meek’s photo exhibit, “The Face of America” and a hip-hop dance show by Pretty Big Movement.

The American entourage was accompanied by Jeonju Mayor Kim Seung-su.

“Ambassador Harris is involved in many activities and programs during his stay in Jeonju for two days,” Kim told the JoongAng Ilbo. “The ambassador’s father served in the Korean War [1950-1953] and the ambassador is very interested in many things about Korea. He told me that it would nice to promote American culture in a traditional Korean city like Jeonju and for the two countries to expand their understandings of each other.”

Kim and Harris held a closed-door meeting for some 30 minutes on Monday.

Harris was appointed U.S. ambassador to Korea last month, filling a post that was vacant for a year and a half after former top envoy of the United States, Mark Lippert, left in January 2017. Harris previously headed the U.S. Pacific Command, becoming the U.S. Navy’s highest-ranking Asian American ever. Harris is the first admiral and highest-ranking military officer to serve as U.S. ambassador to South Korea.

Harris was born in Yokosuka, Japan, to a U.S. Navy officer who served during World War II and the Korean War and a Japanese mother, who was later naturalized in the United States.