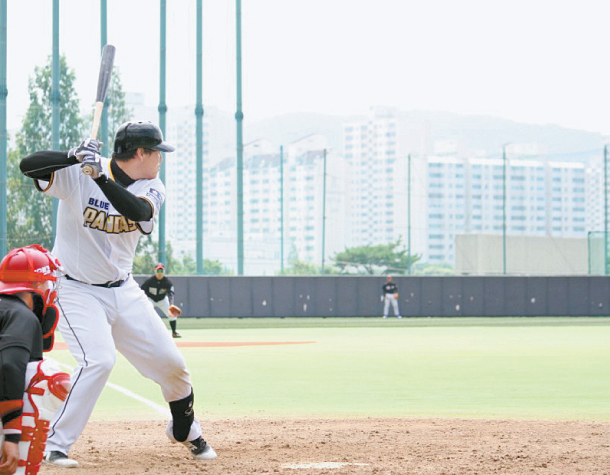 Kim Seong-min of Seongnam Blue Pandas, in white, gets ready to swing during an individual league game. [KIM SEONG-MIN]

At the end of this KBO season, a total of five minor league returnees will join the 2019 KBO rookie draft. While Rhee Dae-eun and Lee Hak-ju are likely to be picked up by teams, others, like Kim Seong-min, also hold out hope that they can restart their professional careers in the KBO. 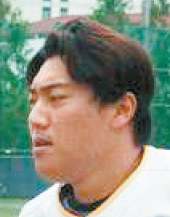 As a high schooler, Kim received plenty of attention from scouts in the domestic and the foreign leagues. After a successful high school baseball career, Kim was signed by the Oakland Athletics for a $510,000 contract after graduating from Yatap High School in Gyeonggi. With the signing, Kim became the seventh catcher in Korean baseball history to play in the United States. However, despite the high expectations, Kim’s dream of playing in the big leagues didn’t work out as he was released by the club after the 2015 season due to injuries.

In his first three years in the rookie league, Kim slowly showed improvement, getting his batting average above .400 at one point. Once he was promoted to a Single A minor league team, though, he failed to perform.

As soon as Kim returned to Korea, he completed his military service. After he was discharged in March, he joined the Seongnam Blue Pandas of the Korean individual league. He is training for KBO minor league returnee tryouts at Suwon Baseball Stadium on Aug. 20.

Below are edited excerpts from Kim’s interview with Ilgan Sports, an affiliate of the Korea JoongAng Daily.

Q. How do you feel about the rookie draft?

A. I’ve waited two years. In the beginning, it felt vague just waiting for that time. But now that the [tryout date] is fast approaching, I’m getting more excited. If I wasn’t preparing for it, I would have felt anxious, but since I’ve been training for it, I don’t feel as nervous.

You were released by the Athletics in your fourth year in the minor league. What was the reason?

I didn’t show them anything. The biggest thing was that I didn’t play well. I was preparing for the season opener after a successful spring camp in 2014, but during a game, I got hit on the mask and suffered a concussion. Due to this, I took about three months off. I played afterward, thinking that I fully recovered, but I still had a minor headache. Since I was injured and wasn’t playing well, I think the club made the decision [to release me].

Did you try to join a different team in the United States?

Once I was released, I rushed to the military. So I returned right away.

Unlike the rookie league, you struggled in the lower-division Single A team. What happened?

It had nothing to do with my injury. I just wasn’t playing well. When I first played in the Single A team, I was hitting well, but once I started playing in more games, I started to lose my pace. I wasn’t good enough.

How did you feel when you first found out you were released?

I had to accept it. It happened because I played poorly. Right after [I arrived in Korea] in March 2016, I served my time in the military as a public service worker. I rested for my first year in Korea and then I started working out. [In January 2018,] I joined the Seongnam Blue Pandas. Recently, I lost about 13 kilograms (26 pounds) from training.

Did you ever regret leaving for the United States?

Since our manager [Ma Hae-young] is such a famous player as a batter, I’m happy that I can learn a lot [from him]. He also teaches us how to play better mentally. More than anything, all the players on our team are desperate. So I like [training with] them.

Do you have any experience as a first baseman?

I [played first base] for a little bit in the United States, but after a short while, I told the club that I’d go back to being a catcher. I’ve been told that my defense and base-stealing abilities aren’t bad, but my problem was batting.

What would you do if you get drafted as a first baseman?

Honestly, it’s more important to play in games. It would be better to be a catcher, but if a club wants me to play a different position, I can adapt myself to it.

If you do get drafted by a team, what kind of player do you want to become?

I want to be a consistent player.