Korea hopes to regain past glory in judo, wrestling at Asian Games

Korea hopes to regain past glory in judo, wrestling at Asian Games

Korea will try to redeem its reputation in judo and wrestling in the 18th Asian Games, which kick off this week in Indonesia. 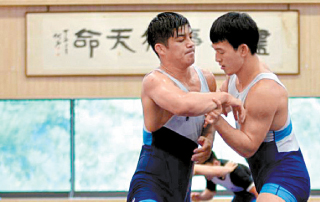 Judo and wrestling have been traditional strengths for Korea in international competitions, but the country fell on hard times at the 2016 Rio de Janeiro Olympics. No Korean judokas or wrestlers returned home with a gold medal.

Korea will try to wash away its painful Olympic memories through the Asian Games and hope its judokas and wrestlers can gain confidence ahead of the 2020 Tokyo Olympics.

For the Jakarta-Palembang Asian Games, Korea will aim to collect at least five gold medals in judo. Fifteen gold medals are up for grabs, including one from the mixed team event.

Korea will send 14 judokas to accomplish the task. Ten of them - six men and four women - also competed at the Rio Olympics.

Korea has particularly big expectations for An Ba-ul, who claimed silver in Rio in the men’s 66-kilogram (145-pound) division.

With world No. 1 Hifumi Abe of Japan not participating in the Asian Games, An’s biggest rival is Kherlen Ganbold of Mongolia, currently No. 5 in the world, and Joshiro Maruyama of Japan, ranked 16th. An is No. 7 in the world.

Other gold medal hopefuls include Cho Gu-ham, who competes in the men’s 100kg. He is currently ranked world No. 14, the highest among Asian judokas. He won bronze at the 2014 Asian Games.

Kwak Dong-han, a bronze medalist in the men’s 90kg at the Rio Olympics, is also looking to stand on top of the podium.

On the women’s side, Jeong Bo-kyeong, who won silver at the Rio Olympics, is one of the gold medal contenders in the women’s 48kg, while Kim Min-jeong, currently world No. 1 in the women’s over 78kg division, is also aiming for a gold.

Korea will try to recapture the title as the best wrestling nation in Asia. The country topped Asian Games wrestling medals from 1986 to 2006, but Iran took over in the last two Asiads.

Korean wrestling is hoping this year’s Asian Games can be a stepping stone to open a new future. Since the late 2000s, the sport has been on the decline in Korea, with the pool of wrestlers getting slimmer with a lack of support.

Korea won three golds at the 2014 Asian Games, but for the Jakarta-Palembang Games, it is targeting five gold medals.

Six gold medals will be offered each in the men’s Greco-Roman and freestyle, and the women’s freestyle events.

Kim, who also has a bronze medal from the 2016 Rio Olympics, is looking for his Asian Games title defense in the men’s 77kg. He injured his right knee in January but has been working his way to recovering his form.

Ryu Han-su is also looking for a second straight gold in the men’s 67kg. He won the World Championships last year and took silver in 2015.

Among freestyle wrestlers, Lee Seung-chul in the 65kg division and Kim Sung-kwon in the 57kg division are considered medal contenders.

On the women’s side, Kim Hyung-joo in the 50kg division and Eum Ji-eun in the 57kg division will target podium finishes.

For the wrestling competition in Asiad, wrestlers have to deal with a revival of “par terre,” which gives a penalty to passive wrestlers. The passive wrestler has to lie face down below his or her opponent before the match is resumed when par terre is ordered.

Korean wrestlers are considered to have an advantage in standing techniques, meaning par terre will likely present more challenges to them.

The wrestlers also have to face a change in the weigh-in schedule. Previously, wrestlers had their weight measured one day before their bout, but for this Asiad, they have to weigh-in on the day of their match.