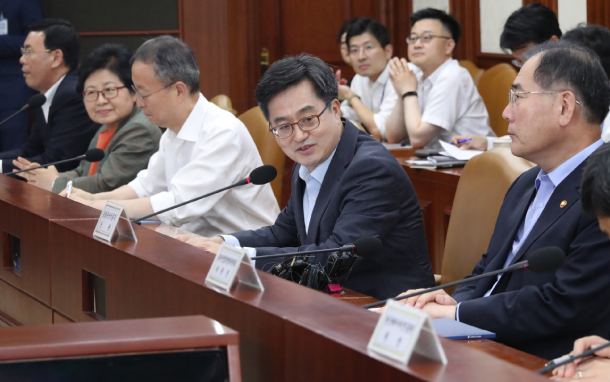 Finance Minister Kim Dong-yeon, second from right, speaks during a meeting of economic ministers on Monday at the government complex in central Seoul. [YONHAP]

The government released a plan to invest 5 trillion won ($4.4 billion) next year in three strategic technologies and eight leading industries that it hopes will spur economic growth and create jobs.

“The 5 trillion won investment is more than 2 trillion won more than this year’s,” Kim said Monday during a top government official meeting on innovative growth.

Kim said that the government plans to invest between 9 and 10 trillion in the three strategic technologies in the next five years.

Since the second half of this year, the Moon Jae-in government has increased its focus on innovative growth as its income-led growth policy centered on increasing the minimum wage has faced strong public blacklash. While labor unions have demanded that the government immediately raise the minimum wage to the 10,000 won per hour that it promised, the business community has complained over the high costs this increase will incur.

The solution that the government has turned is innovative growth, and it’s letting the finance minister take the lead.

Many have long argued that Korea’s economic structure needs to be changed to focus more on high-tech industries, as other business are struggling with growing competition from emerging economies such as China.

During the meeting, Chang Byung-gyu, the Chairman of the Presidential Committee on the Fourth Industrial Revolution, stressed the need for private-sector help in revitalizing the economy.

“There are those that criticize the government’s selection of hydro-economy as a key technology as a policy that supports Hyundai Motor Group,” Chang said.

He argued that despite being a large conglomerate, the government should encourage Hyundai Motor if it is engaging in innovative projects like hydrogen car development.