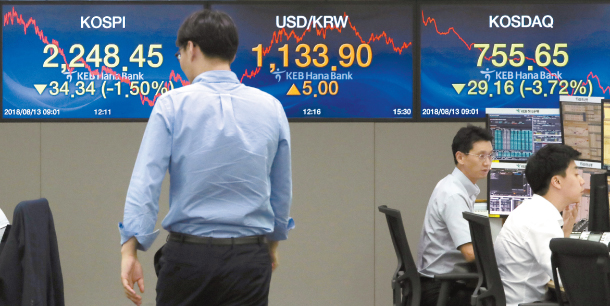 A signboard at KEB Hana Bank’s headquarters in Myeong-dong, central Seoul, shows the Kospi closing down 34.34 points, or 1.5 percent, at 2,248.45 on Monday after the Turkish lira’s plunge sent shock waves throughout the global economy. [YONHAP]

Korea’s main stock index reached a 15-month low as the Turkish lira plunged 8 percent on Monday amid ongoing domestic unrest and tensions with the United States.

Investors believe the falling lira is only one aspect of Turkey’s larger economic crisis. According to the International Monetary Fund, Turkey’s external debt was around 50 percent of its GDP as of April, and its current inflation rate of 16 percent is more than triple its central bank’s goal of 5 percent.

The situation worsened when U.S. President Donald Trump announced last Friday that he would double aluminum and steel tariffs on Turkey.

“Aluminum will now be 20% and Steel 50%. Our relations with Turkey are not good at this time!” Trump wrote on Twitter on Friday. 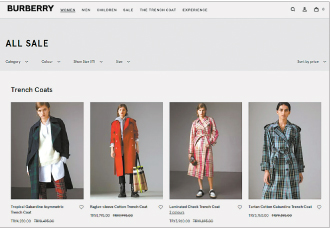 Turkey-U.S. relations took a turn for the worse last week when Turkey failed to release American pastor Andrew Brunson before a U.S.-given deadline. Brunson was jailed in Turkey over two years ago for espionage.

Korean financial experts believe that the crisis in Turkey will not have a long-lasting effect on the domestic economy, however.

“Because the domestic economy’s exposure to European banks is not large, I expect the crisis to have a limited effect in Korea in the long-term,” said analyst Kim Byung-yeon of NH Investment & Securities.

“Though it seems unlikely that the economic crisis from Turkey will spread, we will take appropriate cautionary measures if the currency volatility continues,” said Finance Minister Kim Dong-yeon on Monday.

Many posted questions online on the fastest way to convert the won into the lira, citing hopes of traveling to Turkey with the pre-converted money in the future.

Others took to the web to look for ways to buy goods from global luxury brands’ Turkish websites, especially British clothing brand Burberry.

“Turkey Burberry” and “Turkey direct delivery” were two of the most-searched keywords on Korea’s biggest web portal Naver throughout Monday.