The voice of America

The voice of America 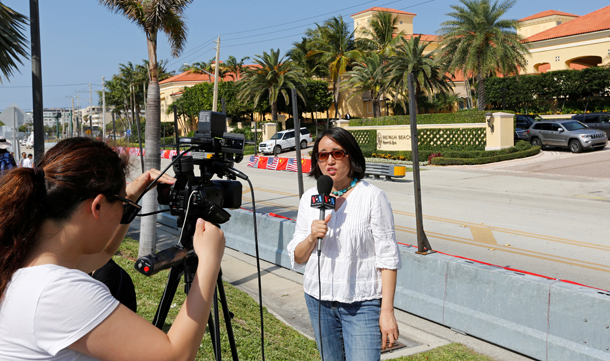 “We bring you Voices from America. Today, and daily from now on, we shall speak to you about America and the war. The news may be good for us. The news may be bad. But we shall tell you the truth.” On February 1, 1942, the 56th day since the United States joined World War II after Japan’s Pearl Harbor attack, the Office of War Information (OWI) started radio broadcasts to the Germans under Nazi rule. This was the beginning of VOA broadcasting. For 77 years since then, the VOA has provided various content on U.S. policies on radio, television and internet to the 236.8 million viewers and listeners in more than 40 languages throughout 2,500 networks.

On June 13, 1942, VOA’s Korean service was launched. The first broadcast was from former president Syngman Rhee, who was then the U.S.-based foreign affairs committee head of the Korean interim government. “We are speaking to the 23 million Koreans from Washington DC. Korean people are not breathing freely under the barbed wire of the brutal Japanese enemies.” From the Japanese occupation through the 1970s, the VOA was the channel for intellectuals to seek hope for the future and access the culture of the world. It also openly denounced the South Korean government during authoritarian rule.

Today, the presence of the VOA has faded as people can easily access culture and information through other channels. Since the end of the Cold War, the VOA has changed its direction to focus on oppressive regimes to advocate democracy, liberty and human rights. Naturally, the Korean service targets North Korea. After the U.S. Congress passed the North Korean Human Rights Act in 2004, the budget was expanded, and staff was added. Since the Korean branch was closed at the end of last year, the Washington headquarters has sent correspondents every three or four months, but the key source of news is Washington.

Lately, the VOA came to the center of attention by getting a scoop on the smuggling of North Korean coal into South Korea. It addressed the reluctant stance of the Korean government and the critical position of the U.S. government on Seoul’s tendency to relax sanctions on North Korea. Some suspect that the United States was expressing its discomfort through the VOA.

A friend who has been working for the VOA for a long time said, “I’ve never seen a case of the U.S. government asking the VOA to write certain news. The trend in Washington is the outcome of collecting news.” The mission of the VOA Korean language service is “accurately delivering Washington’s position to North Korea.” Despite this, it seems that it is now delivering Washington’s position to the South Korean government.