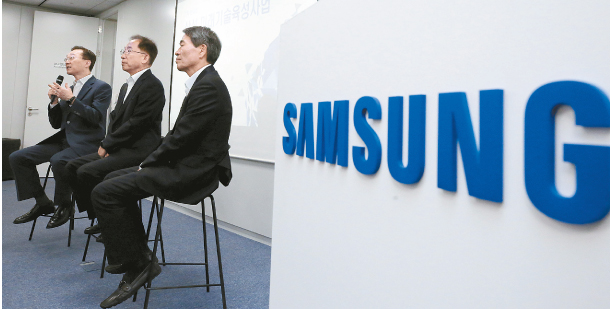 Samsung Electronics will invest 960 billion won ($846 million) through 2022 in local research into science and technology.

The pledge is part of a research program launched in 2013. The electronics giant released interim results for the first five years on Monday at the company’s headquarters in central Seoul.

The goal announced in 2013 was to infuse 1.5 trillion won as support to domestic R&D projects in science and technology. So far, Samsung has financed a total of 538.9 billion won for 428 research projects conducted at local universities and public science institutes. These projects involve more than 7,300 researchers and scientists, including around 1,000 professors.

The remaining budget until 2022 is 960 billion won, which was also part of Samsung’s massive investment plan totaling 180 trillion won over the next three years.

“For the last five years, we made constant efforts to implement and establish a new support model for scientific research,” said Kuk Young, chairman of the Samsung Science & Technology Foundation (SSTF). “We plan to continue our initial drive to open doors to new fields and keep up active support for tasks that aim to solve tantalizing problems.”

SSTF is one of two non-profit units managing the company’s R&D funds. While SSTF focuses on support for research in basic science, Samsung Research Funding & Incubation Center for Future Technology (SRFC) covers a wide range of future technology. Artificial intelligence, Internet of Things, semiconductors and bio were among the fields that Samsung mentioned on Monday were in need of support.

Established in 2013, the two organizations were the first such research institutions set up by a private company in Korea. The idea was to offer grants for risky research others wouldn’t back. In fact, the first round of candidates were selected based on a two-page plan of the project’s main idea.

Samsung emphasized that it does not condemn failed research projects because even “failure can be knowledge property.”

“A success rate of 20 to 30 percent is regarded as a big achievement,” said Kuk. “For basic science, the selection is focused on how creative the researcher’s idea is, and the ultimate goal is to support those researchers to become globally-known academics who could one day win a Nobel Prize.”

Unlike state-funded projects, scientists are given more autonomy and flexibility in conducting their research as they are not required to set quantitative objectives or report interim results. The non-profits’ staff make visits to the research teams once or twice a year, but their main purpose is to check if they need anything.

Intellectual property produced by Samsung-funded research belongs to the university or the institute that conducted them. However, the company also offers support to use the research practically, including help on patent applications and mentoring sessions on marketing and attracting external investment.

The electronics company hosts “Meet-ups” so that outside companies and researchers can exchange know-how. This is part of a larger initiative dubbed “open innovation,” which Samsung hopes will encourage newly developed technology to be actively used and further developed by external agents including start-ups, academia and companies.

“We intend to enhance our research project results with not only funding but a differentiated support program that makes the most of Samsung’s experience and know-how,” said Jay Chang, the head of SRFC.