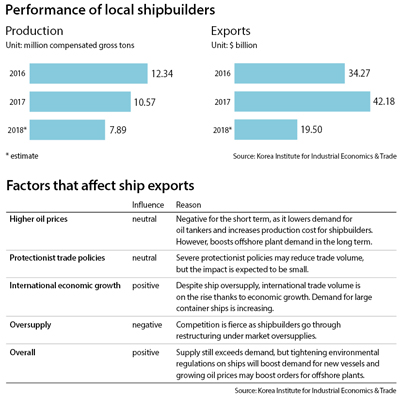 Korea’s shipbuilders are preparing to lay off workers in the second half of the year as orders for new vessels have remained stagnant.

Shipyard workers who just returned from their summer vacations on Friday are worried about their uncertain future. On Wednesday, a member of the Hyundai Heavy labor union uploaded a post online that reads, “I cannot sleep, as we will have to fight for survival after summer vacation.”

For the companies, however, shrinking their workforce has become inevitable, as their shipyards remain empty. Hyundai Heavy’s Ulsan shipyard has no remaining orders for offshore plants after it delivers an offshore oil drilling platform to the United Arab Emirates on Sunday. The company won the order back in October 2014. Since then, it has not won a single offshore plant contract over the last four years due to competition from Chinese shipbuilders that offer lower prices. The shipyard is scheduled to stop operating next Monday.

“We have already let workers temporarily leave work or go on vacation in rotation from the second half of last year due to the lack of orders,” a Hyundai Heavy spokesperson said. “In April, about 700 workers voluntarily retired.”

The spokesperson added that if the Ulsan shipyard stops operating and has no new orders, the company will have to decide on what to do with the facility’s roughly 2,000 workers.

When the shipbuilder submitted a corporate turnaround plan to its creditor bank in 2016, it said it will lay off roughly 5,000 workers. However, the company so far has only let go of around 3,400 workers. While the shipbuilder had promised to ink $16 billion in orders from 2016 through 2018, its orders have only amount to $10 billion so far.

Based on its original proposal, industry insiders expect Samsung Heavy to fire at least 1,000 workers and as many as 2,000 in the second half of the year to meet its turnaround targets.

DSME is currently on the shortlist for Chevron’s Rosebank offshore project, which is worth $2 billion. If it fails to win the project, it will have to downsize its workforce like the others.

Smaller shipbuilders in the country are also facing tough situations. STX Offshore & Shipbuilding is trying to secure cash to build ships by selling 260 billion won ($229 million) worth of non-business assets, such as an apartment complex for workers and a factory site in South Gyeongsang. As creditor banks have decided to stop injecting new funds into the company, it needs to straighten out its finances to take on new orders.

The country’s 10 midsize shipbuilders, including Hanjin Heavy Industries & Construction, STX Offshore & Shipbuilding and Sundong Shipbuilding & Marine Engineering, inked orders to build 12 ships in total during the first half of this year, according to research from the Export-Import Bank of Korea. The orders are worth about 273,000 compensated gross tons, which is an indicator for the amount of work necessary to build a ship, considering ship tonnage as well as vessel types and other factors. This figure is down 23.5 percent from the first half of 2017.

Experts say the public sector needs to order more vessels to save the local shipbuilding industry from struggling during the latter half of the year. They also argue that large shipbuilders should cooperate with small and midsize firms to build eco-friendly ships. Green ships are a potential cash cow for shipbuilders, as global shippers will need to use ships that meet tighter emissions regulations that will be enforced by the International Maritime Organization starting in 2020.

“The second half of this year could be the worst period for local shipbuilders,” said Lee Eun-chang, a researcher at the Korea Institute for Industrial Economics & Trade. “The government and navy should order more public vessels while Korean shippers switch their old vessels to greener ships.”