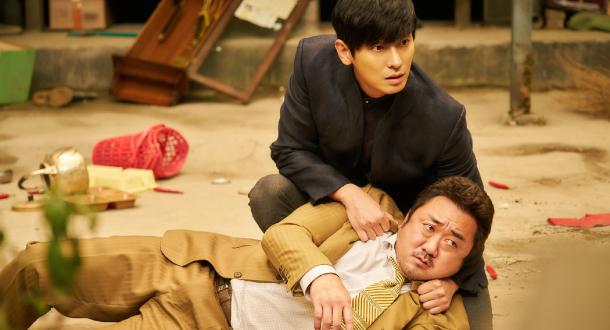 “Along With the Gods: The Last 49 Days” topped Korea’s weekend box office for the second week despite competition from espionage flick “The Spy Gone North.” [LOTTE ENTERTAINMENT]

Despite the debut of a strong contender, fantasy blockbuster “Along With the Gods: The Last 49 Days” was crowned the winner of Korea’s weekend box office, holding off competition from newly-released espionage flick “The Spy Gone North.”

From Friday to Sunday, the “Along With the Gods” sequel sold 1.57 million tickets at 1,380 screens, accounting for 36.2 percent of the weekend’s total ticket sales. According to data provided by the Korean Film Council, the film’s accumulated ticket sales as of Sunday is nearing 10 million, and is likely to hit the mark this week.

Adapted from Joo Ho-min’s sensational webtoon of the same title, the movie, released on Aug. 1, is a follow-up to the megahit “Along With the Gods: The Two Worlds,” which was released in December. The first film sold a whopping 14.4 million tickets, becoming the second best-selling film in Korean history after 2014’s period drama “Roaring Currents,” which sold 17.6 million tickets.

The Lotte Entertainment release tells the story of three grim reapers - played by Ha Jung-woo, Ju Ji-hoon and Kim Hyang-gi - and their relationship a thousand years ago, when they were still alive. Actor Ma Dong-seok co-stars as a tender-hearted god with tremendous physical strength which allows him to knock down several grip reapers in a single swing, but he is unable to lay a finger on humans.

The espionage flick “The Spy Gone North” arrived at a close second.

Screened in the out of competition section at the Cannes Film Festival in May, director Yoon Jong-bin’s flick sold 1.42 million tickets in its debut weekend, making up 33.2 percent of weekend sales.

Starring Hwang Jung-min, Lee Sung-min and Cho Jin-woong, the spy movie is based on a true story of a former South Korean military officer named Park Seok-young. The story develops as Park is recruited in 1993 by the National Intelligence Service to infiltrate North Korea amid leaks of information that North Korea is developing nuclear weapons.

Without flashy action scenes, the CJ Entertainment release calmly maintains tension throughout the two-hour movie. Since its release on Wednesday, the movie has sold a total of 2.07 million tickets.

The summer vacation season has proved to be an ideal time for family-friendly animated films, as animated features “Detective Conan: Zero the Enforcer,” “Hello Carbot the Movie: The Cretaceous Period” and “Incredibles 2” came in at the sixth, seventh and the eighth spots.