Music collective gets creative with its projects : Space Oddity brings together artists to try out something new

Music collective gets creative with its projects : Space Oddity brings together artists to try out something new 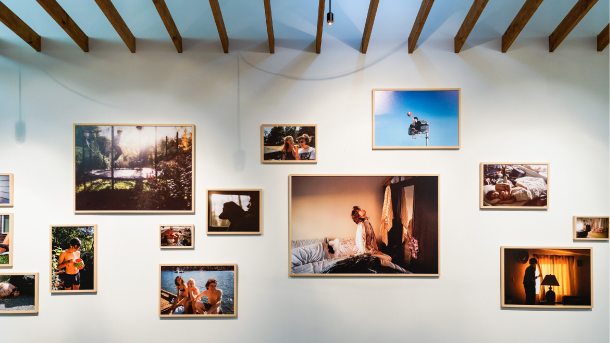 An exhibit titled “Weather,” featuring art inspired by the weather is currently being held at the D Museum in central Seoul. The museum worked with music creative company Space Oddity to create a soundtrack for the exhibition. [D MUSEUM]

There are soundtracks for films and television dramas, so why not for art exhibitions?

Space Oddity, a local music creative group that works on innovative musical projects, decided to give it a try through a collaboration with D Museum in central Seoul. Two oddities (the name by which Space Oddity employees refer to themselves) were assigned to this project by company head Kim Hong-ki. They handpicked musicians whose work best suited the style of the current exhibition at D Museum titled “Weather” as well as a team of producers who they believed would best create video content to go along with the music chosen for the exhibition.

Currently on display at the D Museum, the “Weather” exhibition is made up of around 170 photographs, video, sound and installation works created by 26 international artists, each engaging with natural phenomena such as sunlight, snow, rain, mist and thunderstorms from his or her own unique perspective.

Since weather has long been an essential driving force in art, the museum decided to collaborate with musicians who themselves are greatly influenced and affected by the weather, giving museum visitors a more refreshing and immersive experience. 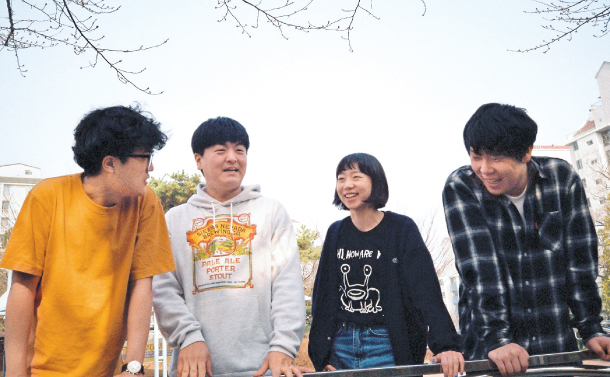 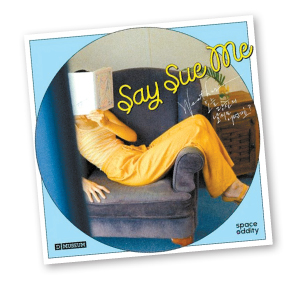 One band who participated in the soundtrack project is the Busan-based rock band Say Sue Me. The band was inspired by works related to summer and sunshine at the exhibition and wrote a song titled “We Just,” which was released online on Aug. 7.

According to Space Oddity, a total of four songs have been created for the soundtrack project and each of them will be released in a series. The second song by O3ohn will be released on Aug. 22 followed by a track from OLNL and Hippy was Gipsy on Aug. 26. Singer and songwriter Lee Jin-ah’s song will come last, on Sept. 1. When all four tracks have been released online, a vinyl record with all four songs will be sold offline. On Sept. 1 and 2, there will also be a special concert at the museum as well, featuring the artists on the soundtrack. A short film for each song has also been produced by Studio Gabworks, which also participated in the exhibition.

This exhibition soundtrack project is just one of many innovative music creative projects launched by Space Oddity, which was established early last year. The company produces music content, but unlike production companies, it does not have a team of producers or artists of its own.

According to Kim, his mission is to allow each project to operate fully under each oddity, who each have a vast network in the music industry. Each oddity becomes the captain of a project, gathers artists who will be the best fit for a specific project and forms a temporary production team, or a so-called “dream team,” to create something innovative, creative and new. The name of the company comes from David Bowie’s 1969 hit song of the same name. 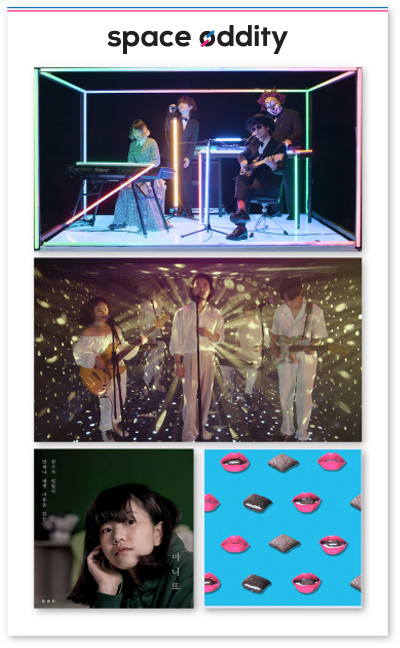 In an attempt to promote indie musicians, CJ Cultural Foundation worked with Space Oddity to create CJ Azit Live, a live video project that can be seen on YouTube, top and center. Above left is Space Oddity’s film project for Melon, a music streaming service, and above right is a project for Kellogg’s Choco Crunch. [SPACE ODDITY]

“Usually, if a company wants to create music, they outsource it and look for a production company who can do it for them,” said producer Hong Young-pyo from Space Oddity.

Hong’s current project with CJ Cultural Foundation is creating live video content called CJ Azit Live to promote indie musicians. The musicians casually perform inside a rectangular box as if they are alone in a little hideout.

“The size of the box is perfect for viewers [to watch] horizontally on their smartphones,” said Hong.

Azit Live, which can be seen on YouTube, has gained attention both in and outside the country. According to Hong, popular American singer Billie Eilish, who will be holding her first Asian concert on Wednesday at Yes 24 Live Hall in Seoul, will be filming inside the box today. Hong said that her agency contacted them first to use Azit Live to promote her music in Korea.

Hong explains that “new and innovative” projects are not always created by experts in the field. For example, one of the most popular projects done by Space Oddity was a film project for Melon, a music streaming service. Instead of requesting a film director for the project, they asked to work with music video director Song Won-young, in the hopes of creating a new kind of video. The result was a success, as the video was seen by more than two million people within three days of its release.

“It is not always easy to gather together famous producers and directors,” said Hong. “But when they hear about the project, they want to be a part of it as it is also a rare opportunity for them to work in a field they may not have expertise in with others they have wanted to network with.”