Moon and Kim to meet again in Pyongyang next month

Moon and Kim to meet again in Pyongyang next month 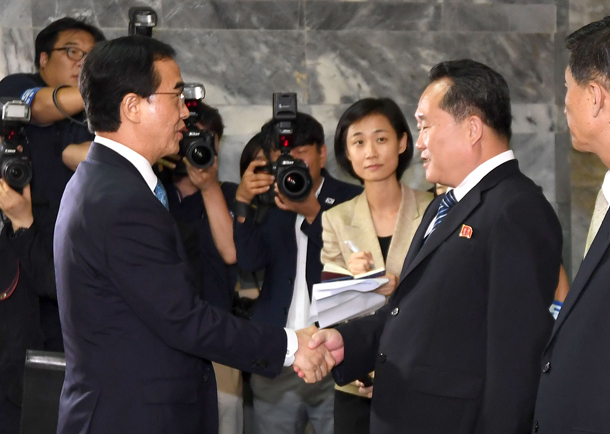 Cho Myoung-gyon, left, the South’s minister of unification, shakes hands with his North Korean counterpart, Ri Son-gwon, chairman of the Committee for the Peaceful Reunification of the Country, after a meeting on the northern side of the border village of Panmunjom on Monday. The two sides agreed on a summit between their leaders in Pyongyang next month but did not announce an exact date. [YONHAP]

The leaders of both Koreas will meet in the North Korean capital of Pyongyang next month for their third summit, a high-level North Korean official said on Monday.

Ri Son-gwon, chairman of the Committee for the Peaceful Reunification of the Country, which handles relations with the South, made the announcement after a meeting with his South Korean counterpart, Cho Myoung-gyon, at the border village of Panmunjom.

“[The summit] will be held in September,” Ri said.

However, the two sides did not agree on an exact date for the meeting. A summit in September will be tricky to schedule because North Korea celebrates the anniversary of its founding on Sept. 9. Another variable is the United Nations General Assembly, which starts on Sept. 18. There is a chance that North Korean leader Kim Jong-un could push for a summit with South Korean President Moon Jae-in before the General Assembly.

Cho, the unification minister, said in a news briefing that the two sides would continue to discuss a date for the meeting.

“Since the fall summit will be held in Pyongyang as agreed upon in the Panmunjom Declaration, the opinions of the North on this matter are very important,” Cho said. “We have agreed that the summit should be held sooner rather than later.

Moon and Kim had agreed to meet in Pyongyang in the fall during their first face-to-face meeting in April at Panmunjom. In recent weeks, there have been growing calls for them to meet sooner to resolve an apparent impasse between North Korea and the United States on the North’s denuclearization.

Washington wants the North to provide a detailed list of its nuclear stockpile, and Pyongyang wants to replace the armistice that ended fighting in the 1950-53 Korean War with a peace treaty, but both sides have struggled to find middle ground between their demands.

The high-level talks between the two Koreas on Monday were held at a North Korea-controlled building in Panmunjom. The South was represented by Cho, minister of unification; Chun Hae-sung, vice minister of unification; Nam Kwan-pyo, second deputy director of the Blue House’s National Security Office; and Ahn Moon-hyun, deputy director general in the Prime Minister’s Office.