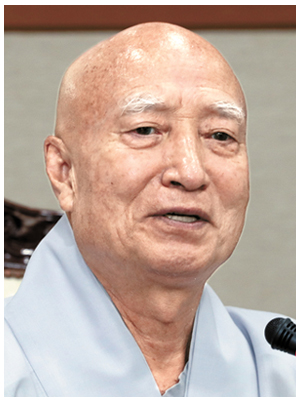 The president of Korea’s largest Buddhist sect refused to resign on Monday, reversing an earlier decision to step down over a host of scandals that have tainted the organization’s image, and defying a call from the group’s spiritual leader.

The Venerable Seoljeong, the Jogye Order’s current president, said at a news conference at the order’s headquarters in central Seoul that he would remain in office until the end of this year in order to oversee a reform committee tasked with overhauling the organization.

“I have tried to resign for the sake of the order’s stability,” Seoljeong said, “but I have reached the conclusion that this was not the right path after witnessing the covert and systematic scheming by established forces in the organization.”

Facing a litany of allegations including embezzlement, academic forgery and fathering an illegitimate child, Seoljeong has been at the center of an internal crisis in the organization for months, with reformist monks calling for his ouster. He had announced his intention to resign on Aug. 2 following months of heavy criticism from reformist monks and public outcry after the broadcaster MBC aired a story on the scandals in May. An 87-year-old monk in the Jogye Order, the Venerable Seoljo, even began a fast outside the Jogye Temple on June 20 demanding Seoljeong’s resignation. He was hospitalized on the 41st day of his fast.

On Monday, Seoljeong called the accusations against him “completely baseless and forged with evil intent.”

The Jogye Order, which oversees about 1,900 active temples and over 13,000 clergy nationwide, commands the faith of around 7 million Koreans according to the 2015 census. As its president, Seoljeong holds complete authority over the order’s finances and administrative decisions. His refusal to step down on Monday means little end in sight for the internal conflict that has now ensnared other elite monks and former leaders accused of corruption and power abuse.

The Venerable Jasung, Seoljeong’s immediate predecessor, is now pursuing a motion of no-confidence against him despite being accused of numerous ethical lapses himself. His critics say it is a move to deflect blame away from himself. Seoljeong implicitly referred to such attempts to oust him on Monday and justified retention of his post as a means to lead efforts to reform the organization.

Nonetheless, an emergency council of senior monks set to meet on Thursday could vote to impeach him.