Artists come together for unification : The 2019 One K Global Campaign will feature songs, art and a concert

Artists come together for unification : The 2019 One K Global Campaign will feature songs, art and a concert 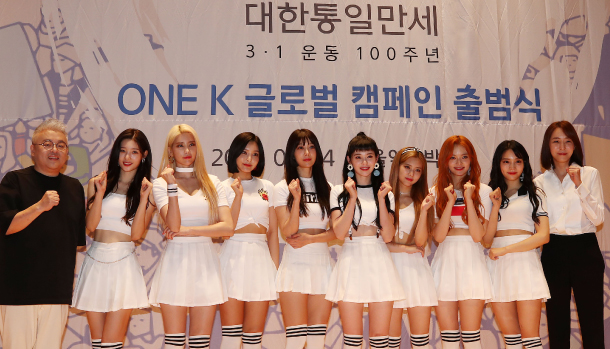 From left to right is composer Kim Hyeong-seok, members of girl group DIA and lyricist Kim Ea-na at the introduction ceremony for the “2019 One K Global Campaign,” which took place at the Seoul Museum of History in central Seoul on Tuesday. [YONHAP]

To commemorate the 100th anniversary of the March 1st Independence Movement against Japanese colonial rule, the One K Global Committee will host a series of events throughout 2019 including a concert, an art exhibition and the release of a documentary about a city in England where people from North and South Korea live together.

On Tuesday, the committee announced its plans for the “2019 One K Global Campaign” at the Seoul Museum of History in Gwanghwamun, central Seoul. The campaign aims to be the largest ongoing event promoting unification on the Korean Peninsula, according to Seo In-teck, the co-chairman of the One K Global Campaign Organizing Committee, who, together with Lee Bum-hun, chief director of the Korean Fine Arts Association, composer Kim Hyeong-seok, lyricist Kim Ea-na and girl group DIA, introduced the events planned throughout the year.

“One K Global Campaign is a campaign designed to form a national consensus and expand the global support by spreading the ‘Korean Dream’ through the power of culture,” said co-chairman Seo.

In 2015, the campaign began with the release of the song “One Dream One Korea.” Composed by Kim Hyeong-seok and written by Kim Ea-na, the song featured K-pop artists such as Exo’s Baekhyun, BTS’ Jungkook, Got7’s Youngjae and Red Velvet’s Wendy, as well as then-New Politics Alliance for Democracy (NPAD) leader Moon Jae-in.

“One Dream One Korea” was heard by K-pop fans all around the world and was even played at the inter-Korean summit this April. Seo believed that K-pop would be the perfect medium to gain support for unification. The 2017 One K Global Concert held in Manila, Philippines, featured performances from K-pop artists such as Psy and SHINee, and was televised in 170 countries around the world.

Kim Hyeong-seok and Kim Ea-na have once again joined the One K Global Campaign to create a new song titled “Korean Dream.”

Lyricist Kim Ea-na explained that she came up with the lyrics for “Korean Dream” after having a meeting with Seo. “The moment I was able to grasp how to write the lyrics was when I realized I was only looking at the goal of unification.”

Kim said she only looked at the moment of unification rather than what happens after. “I was dreaming a small dream. I want to write in a way where I am looking towards the future,” said Kim Ea-na.

Along with the campaign song, the One K Global Campaign Organizing Committee has prepared a number of cultural projects promoting unification such as an art festival showcasing embroidery art pieces by North Korean artists and a documentary film by director Lee Chang-soo.

“Unification is truly a difficult subject. What I learned from working with a British director and writer is that they have a lot more interest in the ethnic identity of North and South Koreans than I thought,” said Lee.

He worked on the film with British director Robert Cannan and director and writer Ross Adam.

Lee flew to New Malden, a suburb in southwest London, to film the documentary because the suburb is home to many North Korean refugees. “I am creating the framework of the documentary to include the experience of refugees, and the North and South Koreans living together as one community in New Malden.”

“On the special day of independence on March 1, I hope that we can all feel people’s desire for unification, and hope that this campaign will be internationally supported. There is a quote that says, ‘A dream dreamt by one person is a dream, but a dream dreamt together is a reality,’” said co-chairman Seo.