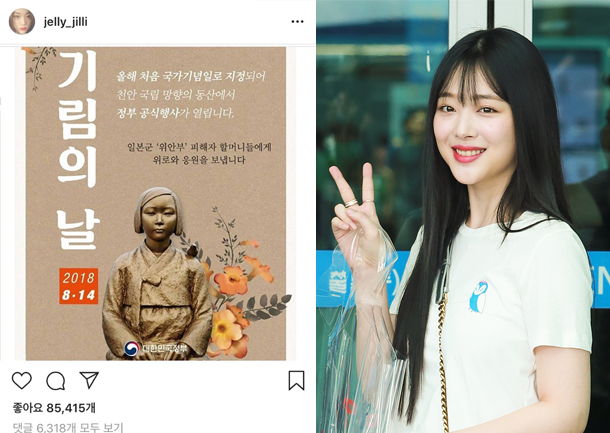 Singer-turned-actor Sulli was criticized by Japanese fans for sharing a poster celebrating Comfort Women’s Day on her Instagram account Tuesday.

Comfort Women’s Day was created to honor victims of sexual slavery, euphemistically referred to as comfort women in Korea. This is the first year it was designated a national memorial day by the Korean government.

The poster Sulli shared through her Instagram included information about a ceremony that will be held at a national cemetery in Cheonan, South Gyeongsang, to honor the comfort women.

Sulli’s post went up on Tuesday and immediately her Japanese fans voiced their discomfort about the post, adding comments such as, “There is no reason for her to post a political issue on her Instagram,” and “Never come to Japan ever again.” Korean fans praised her for the post, writing comments such as, “This time Sulli did something good,” and “We support you Sulli.”