A day to honor ‘comfort women’

A day to honor ‘comfort women’ 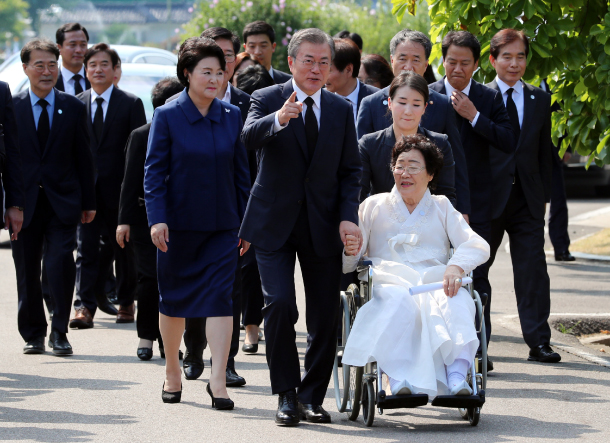 The South Korean government unveiled a monument at National Mang-Hyang Cemetery in Cheonan, South Chungcheong, on Tuesday to honor women who were forced into sexual slavery by the Japanese military before and during World War II.

The ceremony was one of many across the country marking the first memorial day for so-called comfort women victims.

The Ministry of Gender Equality and Family designated the day this year to honor the tens of thousands of Korean women who were forced to serve in Japanese military brothels.

The date, Aug. 14, represents the day when Kim Hak-soon testified about her experience as a sex slave in a news conference in 1991. It also falls one day before Liberation Day, when Korea gained independence from Japanese colonial rule.

Kim was the first Korean woman to break more than 50 years of silence on the comfort women issue and led dozens of others to tell their stories. She spent the rest of her life advocating for the women until her death in 1997.

The ministry said in a statement that the memorial, which translates to “House of Rest,” illustrates the four life stages that most victims went through: the terrifying moment when they left home; their painful time in the brothels; the moment they shared their stories; and when they “fly away” as butterflies.

About 400 people attended the ceremony at the cemetery to mark the first comfort women day, including victims, their advocates and President Moon Jae-in.

Moon said earlier that day at the Blue House that he hoped the comfort women issue would not lead to a “diplomatic dispute” between South Korea and Japan, adding that it could only be resolved when both countries and the rest of the world “deeply reflect” on the sexual violence imposed on the women and vow not to repeat past mistakes.

“I don’t think this issue can be settled with a diplomatic solution,” Moon said, breaking from a statement he made last March when he called Japan the “perpetrator.”

Political analysts believe Moon is wary about upsetting Tokyo at a critical time when he needs the country’s support to handle the North Korean nuclear crisis.

A Blue House official who spoke on the condition of anonymity on Tuesday said Moon would stress a “future-oriented relationship” for Seoul and Tokyo when he delivers his Liberation Day speech today.