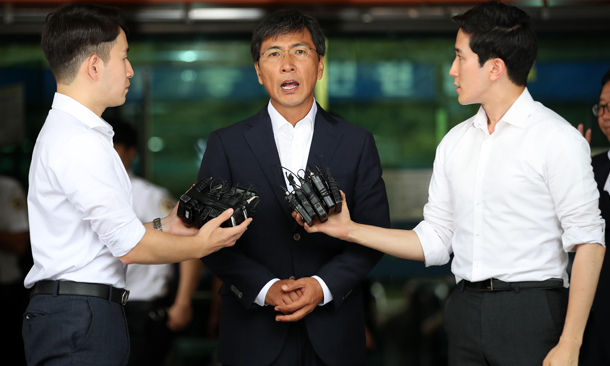 An Hee-jung, former South Chungcheong governor, speaks to reporters after the Seoul Western District Court on Tuesday cleared him of charges of raping and sexually assaulting his secretary on multiple occasions. [YONHAP]

Former South Chungcheong Gov. An Hee-jung, the highest-profile suspect in Korea’s Me Too movement, was cleared of charges of raping and sexually assaulting his secretary on multiple occasions Tuesday after a local court ruled there was not enough evidence against him.

The verdict sparked an outcry from local feminists, who claimed it poured cold water on the country’s belated - yet fast-spreading - reckoning of sexual abuses and women speaking out about their harrowing experiences.

Prosecutors said they will appeal.

Kim Ji-eun, the former secretary who described the ex-governor’s alleged sexual misconduct during a live interview with JTBC on March 5, said she won’t back down.

The Seoul Western District Court ruled Tuesday that there was “a lot of doubt” about Kim’s testimony and that it was difficult to perceive her sexual freedom as infringed upon.

The court said it found it hard to accept prosecutors’ claims that Kim was in a “dissociative state,” a mental process that causes a sense of detachment from reality, as she was allegedly abuse.

Prosecutors refused to accept the verdict, saying they had sufficient evidence proving An raped Kim four times and sexually harassed her on six other occasions from July 29 of last year to Feb. 25 while Kim, 33, worked as his secretary. Prosecutors stressed that An, 53 and married with two kids, abused his authority.

An, who admitted to having sex with Kim but said the relationship was consensual, told reporters after the trial Tuesday that he wanted to say “sorry” to the general public and felt “ashamed.”

In a written statement, Kim vowed to fight against the “unreasonable” verdict.

“I was scared and afraid,” she wrote. “I was terribly hurt and agonized by everyone who tried to crush the truth with lies and silence, and the defendant’s denial to self-reflect. Yet the reason why I’m alive today is because I had people who stood by me.

“Please stand by me until the end,” Kim continued. “I beg you.”

The ruling Democratic Party, which expelled An after Kim’s interview on JTBC, a local cable channel affiliated with the Korea JoongAng Daily, said it had no plans to reinstate him. Democratic Party Spokeswoman Back Hye-ryun said internal talks on the matter would only be possible after the Supreme Court hands down a final verdict in the case.

Shin Ji-ye, who ran for Seoul mayor earlier this year on a feminist platform, accused Korea’s judicial system of sexual abuse, saying that it and the National Assembly qualified as examples of jeokpye, or deep-rooted evil, which President Moon Jae-in has vowed to eradicate from society.

Some members of Womad, a radical feminist website, threatened to assassinate An.

“Do you think you’d be able to live without shame?” wrote one person on the site. “I’ll show you what a stab feels like. Wait for me.”

“What [does the court mean when it says] it’s hard to punish [An] in the current legal system?” wrote another. “You mean it’s hard for men [to do so].”