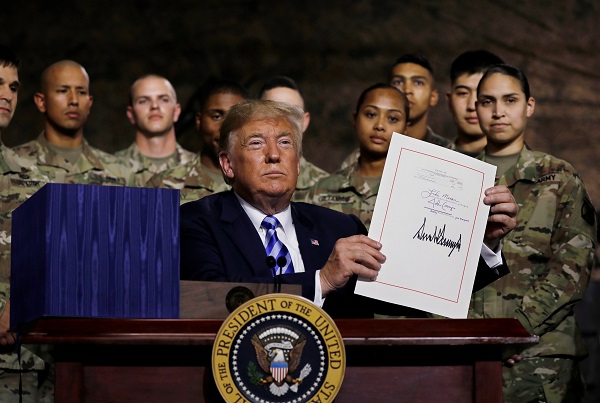 U.S. President Donald Trump on Monday in New York signed a defense authorization bill that restricts him from unilaterally reducing the number of American troops in South Korea to below 22,000 military personnel.

The John S. McCain National Defense Authorization Act for 2019, which will be implemented from October, allocates $716 billion to the Pentagon and, in large, focuses on threats posed by China.

Under the act, the total number of troops on active duty deployed to South Korea cannot be dropped below 22,000 unless the U.S. Defense Department certifies to Congress that such a reduction is in its “national security interest” and “will not significantly undermine the security of United States allies in the region.”

The U.S. defense secretary is also expected to have “appropriately consulted” with key allies involved, including South Korea and Japan, on any reduction of troops. There are about 28,500 U.S. troops currently stationed in South Korea.

The bill also notes that North Korea’s nuclear program “poses a critical national security threat” not only to the United States, but threatens the “security and stability of the entire Indo-Pacific region,” including South Korea, Japan and Australia.

It adds that it is the “sense of Congress” that the United States “stands unwaveringly behind its treaty obligations and assurances,” including providing defense and extended nuclear deterrence to these three countries.
“The presence of United States Forces on the Korean Peninsula should remain strong and enduring,” it added.

Trump has previously indicated he may like to eventually see a withdrawal of U.S. troops in South Korea and questioned the necessity of an extended nuclear umbrella in the region during his campaign.

The bill, passed by Congress at the beginning of this month, also says that the “complete, verifiable, and irreversible denuclearization,” or CVID, of North Korea “remains a central foreign policy objective of the United States.”

It added that “the status of any denuclearization or end-of-conflict agreement with the Democratic People’s Republic of Korea should not supersede” its treaty obligations and assurances to South Korea and other allies.

Thus, the bill establishes that any sort of declaration to end the 1950-53 Korean War will not come at the cost of the United States’ alliance with South Korea.

“We’re doing a major upgrade of our missile defense,” said Trump at the signing ceremony at Fort Drum in New York, Monday. “We’re spending a tremendous amount of money on our nuclear arsenal.”
He continued, “We will hopefully never, ever have to use it. But nobody will be close.”

Trump also lauded North Korea’s return of the remains of “fallen warriors who gave their lives many years ago in Korea,” referring to the 1950-53 Korean War. “Now these American heroes are finally starting to come home.”

The bill calls for an increased, layered defense of the U.S. mainland, namely from North Korea and Iranian threats.
But it adds that the act may not be “construed to authorize the use of force against Iran or North Korea.

The bill calls upon U.S. Secretary of Defense Jim Mattis to submit to Congress a report on the status of the North’s nuclear program to “establish a baseline of progress for negotiations with the Democratic People's Republic of Korea with respect to denuclearization.”

The report should describe the “location, quantity, capability, and operational status” of North Korea’s nuclear, chemical and biological weapons as well as its ballistic missile launch sites.

The defense bill reflects an overarching focus of U.S. concerns toward strategic threats posed by China and Russia, but also reflects concerns by Congress on the situation on the Korean Peninsula.

Washington is in “close contact” with the South about a “unified response to North Korea,” a U.S. State Department spokesperson said through a statement Monday. "As President Moon [Jae-in] stated, 'The improvement of relations between North and South Korea cannot advance separately from resolving North Korea's nuclear program.'"