The linchpins of Korea’s bowling team

The linchpins of Korea’s bowling team 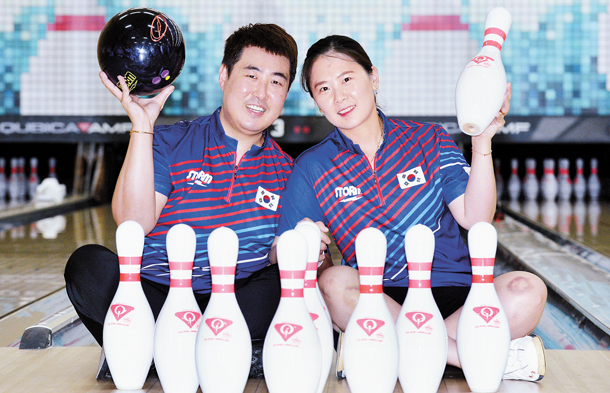 Kang Hee-won, left, and Lee Na-young at the National Training Center in Jincheon County, North Chungcheong, on Aug. 6. They are the captains of Korea’s bowling team at the Asian Games. [KIM SUNG-TAE]

Korea is very good at bowling. Since the sport was first introduced to the Asian Games in 1978, the country has won the most medals, a total of 72, including 31 golds. Koreans have dominated the past four Games, the women’s team especially, having won more than half of Korea’s bowling medals.

This year, Kang Hee-won and Lee Na-young are the captains of the men’s and women’s teams. They are also married.

“Since we’re competing in the big event together, we’ll get twice the cheers,” said Kang, the husband.

The couple has a house in Ulsan, but they don’t spend much time there. Instead, they live near the National Training Center in Jincheon County, North Chungcheong, where they’re preparing for the Asian Games, which begin on Saturday.

Collectively, Kang and Lee have won a total of nine medals at the Asian Games. Kang won three - a silver medal at Doha 2006 in Qatar and gold and bronze at Incheon 2014 - and Lee won six - four golds, one silver and one bronze all at Incheon 2014.

“We got close by talking about bowling techniques,” Kang said. “I never thought about marrying a bowler, but it all changed when I met my wife. It’s a lot more comfortable because she understands me better.”

The two began dating in 2013, and after two years, they got married.

Throughout their career on the national team together, they have been each other’s biggest support. After Lee suffered a knee injury at Incheon 2014 and went under the knife, she spent a year in rehabilitation. It might have been longer if not for the help of her husband.

“I changed my bowling style a lot after the injury,” Lee said. “My husband gave me a lot of suggestions about my style, and his advice allowed me to return to the national team [more quickly].”

Kang, too, said Lee helps him feel a lot more stable during tournaments, and that improves his performance.

“Since I feel a lot more comfortable, I think this also has a positive effect in my games, too,” Kang said.

The Korean bowling team, led by Kang and Lee, faces a big challenge at the Asian Games. This year, the number of bowling events has been cut in half, from 12 to six, and other teams like Chinese Taipei and Singapore have jumped in world ranking.

However, Kang believes that their team will once again dominate the Asiad.

“Korea has good bowling techniques, but we are also really strong mentally,” Kang said. “We’re up for something big at this year’s Asian Games.”

For Lee, this will be her last Asian Games. “It would be so meaningful for us as a couple to win gold medals together,” Kang said.

“But it’s okay if we don’t,” Lee chimed in. “I’m satisfied about the fact that we’ve gone through our careers together.”