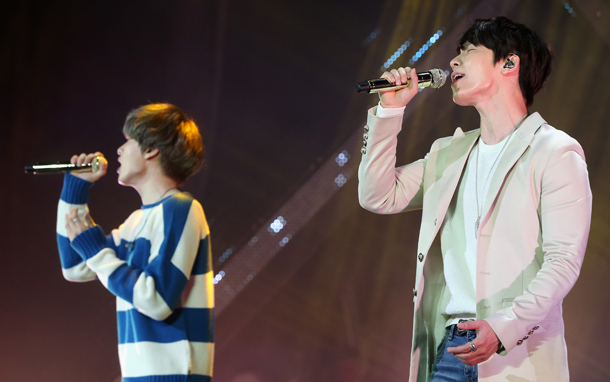 The absence of long-running Super Junior member Kyuhyun, who is currently serving in the military, has left Super Junior fans eagerly waiting for next year, when the boy band will return with the full 11-member lineup.

Filling the void, Super Junior-D&E, a subunit of two members - Donghae and Eunhyuk - will return to the K-pop scene with the duo’s second EP, set for release on Thursday.

The EP, titled “Bout You,” is the duo’s second release since “The Beat Goes On” was released in March 2015.

The title track, whose Korean title translates as “From Head to Toe,” was composed by Donghae, a rare feat for an SM Entertainment artist.

The song is a trap hip-hop number that depicts a boy’s confession of love, whose music video and concept images were shot in the streets of New York.

“Trap hip-hop is a genre that many people are already familiar with, but for Super Junior-D&E, it’s their first attempt,” Donghae said in a recent interview with Yonhap News Agency.

The songwriting is a result of Donghae’s long-time friendship with Eunhyuk, which he said captures the essence of the duo’s charms from the perspective of an insider.

“I met Eunhyuk at the age of 15 and [our long friendship] enabled me to know when he shines most brightly,” the 32-year-old Donghae said.

“I was disappointed sometimes when we were given certain songs composed by others because Eunhyuk did not go well with certain parts of the songs,” he said. “That feeling of lacking set me out on the work to compose the song. I hope this will be a satisfying gift for our long-waiting fans.”

While the format of Super Junior pushed the members to aim high and go global, the subunit serves as an outlet to reach more easily out to fans, Eunhyuk said.

“Super Junior is into global challenges. Super Junior members are brooding over whether they should return with a new image” as the group is set to make a comeback, he said, referring to the 11 members’ new record following Kyuhyun’s completion of his military service next year.

“In contrast, Super Junior-D&E is more into easy-listening songs. The reason we chose trap hip-hop this time is because the young generation is very familiar with that. I hope the public can feel at ease with our music,” Eunhyuk said. Yonhap